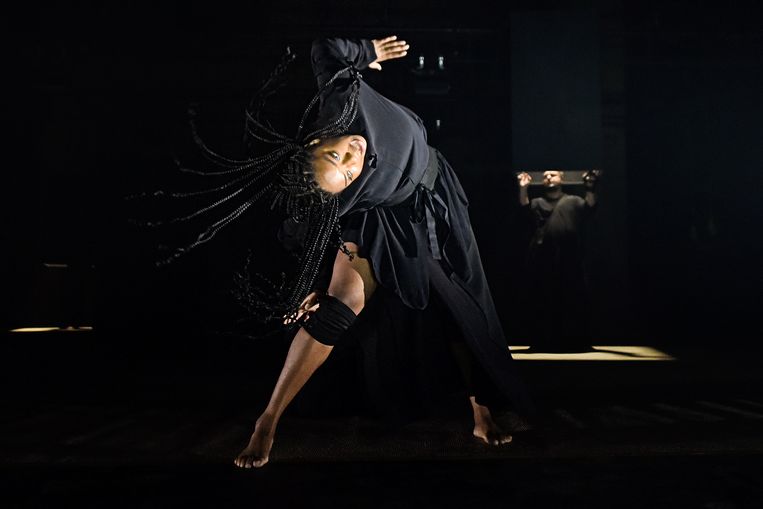 “Democracy dies in darkness, freedom in darkness. With these penetrating words, the otherwise cheerful Mohamedou Ould Slahi (50) kicked off the Groningen premiere. Freedom, via a video link to Dubai. The new show from Club Guy & Roni and Slagwerk Den Haag highlights the astonishing story of his life: the Mauritanian was jailed at Guantánamo Bay for fourteen years, without trial or charge. In the aftermath of September 11, the United States declared him an enemy of the state because of his former severed ties to Al Qaeda and exposed him to illegal interrogation methods.

After a book (Guantanamo Journal), a film with Jodi Foster and Benedict Cumberbatch (Mauritanian), a documentary (My brother’s keeper) and a podcast (Slahi – 14 years old Guantanamo) now there is this raging dance concert with nine performers and eleven fans. The latter descend and ascend with the chatter of chains; they look like cells, have bags over their heads, and regularly isolate dancers and percussionists from the rest. Sometimes they obscure the public view, like America censored Slahi’s black newspaper.

Darkness is also the atmosphere in which Freedom electrifies the scene. Dull blows, fierce flashes of light, kicks, canes, punches, hammers and scratching pencil strokes cause an attack on the senses. Freedom However, it also smashes into the dark gray area in which a Western country places itself outside the legal order for revenge. For five quarters of an hour, the scenographer Ascon de Nijs paints windows of offices, airplanes and Ground Zero on the background with infernal streaks. Dancers in black dresses sway forward, lean back, slip from their hands, jump on tubes and barely pass out. On tape, an interrogator condemns his own torture, but expresses no regret. “Everyone’s a walking story,” says Slahi. His shootings during Freedom black walls with streaks of light.