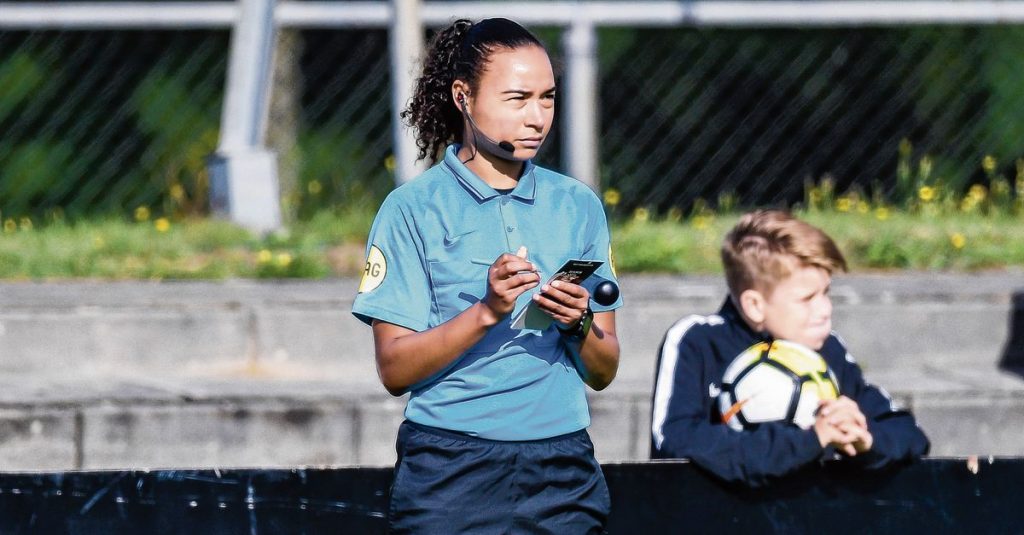 Franca Overtoom (29) couldn’t hold back tears when she learned from her coach on Monday that she would become the Eredivisie’s first female assistant referee. “When he said I would be on the line on Sunday in the Go Ahead Eagles game between Go Ahead Eagles and FC Groningen, I was speechless at first. Debut at the top level is something you have invested in all these years.

For a moment, his debut threatened to go down the drain, as the KNVB was considering postponing the schedule due to the empty stands. In consultation with the clubs, it was decided to continue playing football. “Of course it’s a shame that I’m making my debut without an audience,” Overtoom says. “The supporters are part of football.

In 2018, she made her debut in the Eerste Divisie, the competition where she regularly flies flags. At the end of October, she was active in the Limburg derby between MVV and Roda JC. After a corner, Overtoom was able to set off just in time when the crowd threw beer on the pitch. So things got out of hand; supporters launched fireworks and riots broke out. The match was stopped. “It’s a shame that incidents like this happen, but I never felt unsafe during or after a game. I don’t take these things personally,” Overtoom said.

When did it start for you?

“My parents abandoned me as a referee when I was ten years old. They thought I needed to work on my self-confidence and thought that whistling matches would help with that. Until I was 21, I combined it with football at the Victoria-O association in Obdam. Then I had to choose and because of the career prospects I chose to become an assistant referee.

“While my peers were playing football, I was training on the same pitch. Sometimes I miss the matches. As a linesman you don’t know the feeling of winning or losing because there is no opponent.

You are a dentist in the Navy. Can it be combined?

“I work five days a week at the Den Helder naval base. I train every night of the week except Monday. It’s great that all these hours of work are rewarded with a start in Eredivisie. Also because I sometimes have to miss an evening because of this schedule. Socially, sometimes you make an unpopular decision. So I hope to have more free time in the future.

The navy and professional football are known as strongholds for men. Do you feel at home there?

“I cannot deny that I found myself in two worlds of men. But I feel like a fish in the water on the ground and at the naval base. I never had the feeling that they treated me differently from male colleagues.

Overtoom grew up in the West Frisian village of Obdam in a sporty family. Both his brother Kees and his sister Marisca are active as second division referees. His other brother Willie played as a professional soccer player at AZ and Heracles, among others. Sister Jessica remains in the room at Eredivisie level and is a goalkeeper for the Dutch beach football team.

“It helps that they’re so athletic. Every now and then we go to practice together on the Obdam football pitch. We encourage each other and then work on fitness. Willie has also given me advice in the past, for example telling umpires what he himself finds irritating.

What are your goals for the future?

“I hope to be there next year at the European Women’s Championship in England. My ultimate goal is the 2023 World Cup in Australia and New Zealand. I’m working hard on this. I hope to become a permanent part of the Eredivisie in men’s football.

A version of this article also appeared in NRC on the morning of November 19, 2021