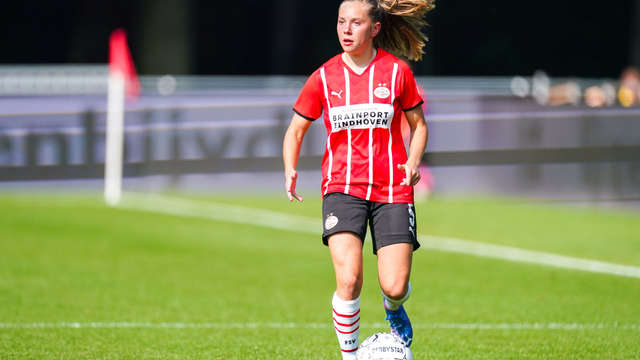 Footballer Janou Levels de Herten was selected for the Dutch national team for the first time. The Orange Lionesses will play two World Cup qualifiers against Cyprus and Belarus next week.

Levels, born in Roermond and raised in Herten, has been playing for PSV since the 2018-2019 season. The defender already traveled to Eindhoven at the age of 14 to play in the CTO Team, a talented team where players can optimally combine school and sport.

Trio
Janou Levels is one of three Limburg players selected by national coach Mark Parsons. Lieke Martens of FC Barcelona and Dominique Janssen of VfL Wolfsburg have also been called up. Lynn Wilms, who also plays for Wolfsburg, has not been selected. She is still recovering from a back injury.

Opportunity
“This is the opportunity to see new players like Janou Levels,” national coach Parsons said via the football association’s website. “We can see that things are going well at the club, it’s interesting to see how the level is rising up close.”

World Cup Qualifiers
The Orange Lionesses will play for the first time against Cyprus on Friday 22 October and Belarus will be an opponent at Dinamo Stadium in Minsk on Tuesday 26 October. In September, there was a 1-1 home draw against the Czech Republic and the away game against Iceland was won 2-0. In Group C, the Netherlands decide with the four above countries that will qualify directly for the World Cup in Australia and New Zealand in 2023.