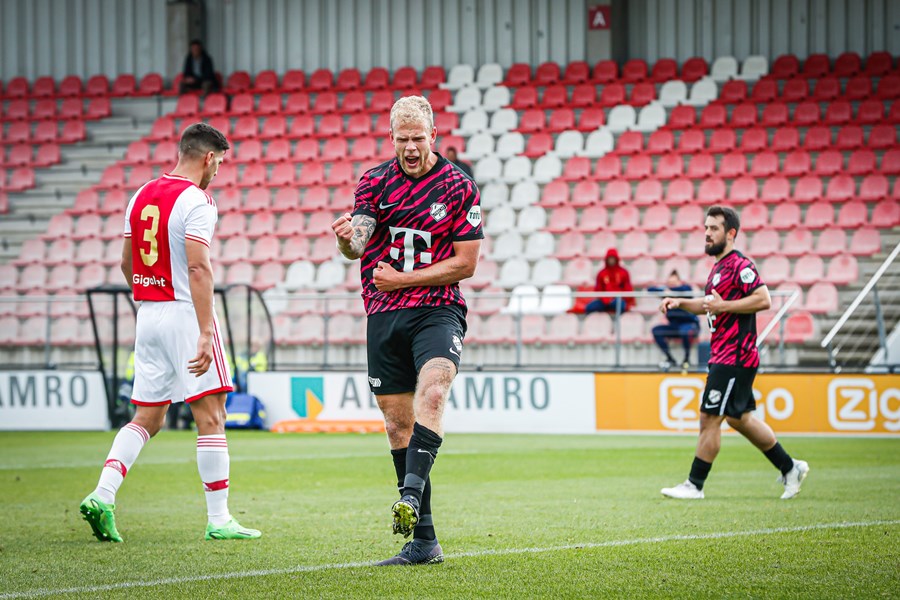 FC Utrecht beat Ajax in a behind closed doors friendly this afternoon (Tuesday). The Utrecht side fell behind at De Toekomst in Amsterdam, but Luuk Brouwers and Rick Meissen secured the comeback before the break: 1-2.

Amin Younes’ cross is measured, as is Rick Meissen’s completion. As if he were a striker who regularly finds himself in a promising position every game, Meissen rounds skillfully from close range. The deaf blow of the defender of FC Utrecht, released in additional time of the first half, is untenable for the chastised goalkeeper of Ajax Maarten Stekelenburg: 1-2.
And with that, the turnaround was completed by FC Utrecht in just fifteen minutes. Head Coach Henk Fraser’s team fell behind after ten minutes on a goal from Lorenzo Lucca who, after some preparatory work from Ar’jany Martha, sent the ball into the goal kept by Calvin Raatsie (1-0) . This happens in a phase of the match where FC Utrecht are struggling against Ajax.
In the friendly match, where (youth) internationals from the Netherlands, Germany, Japan, France, USA, Suriname, Argentina, Austria and Italy play, FC Utrecht improves over the minutes. This results in equalization after half an hour. Naoki Maeda puts the ball in front, Luuk Brouwers header as hard as a determined shot: 1-1. The primal scream that follows proves it once again: this may be a practice game, but the game is played with the intensity one would expect in a real duel.
Again and again he collects. Ajax player Kik Pierie and FC Utrecht players Daishawn Redan and Amin Younes receive the yellow from referee Jannick van der Laan, who even throws Ajax defender Lisandro Magallan for the second time after an hour of game, and so with field red sends.
In the last half hour of the match, in which Eliano Reijnders, among others, joins the FC Utrecht team to make his unofficial debut for the Domstedelingen main team, Ajax try to force an equalizer. But FC Utrecht, with Thijmen Nijhuis at the back at the time (he replaces Raatsie at half-time), Sean Klaiber, Ruben Kluivert, Meissen and Django Warmerdam (they play every ninety minutes at Amsterdam) convincingly defend themselves and thus draw the win on the line.

FC Utrecht’s next game is on Sunday 2 October. On that day Fraser’s team will visit Excelsior and there will be a battle for three points in the Eredivisie. The Utrecht team’s next home game will be on Sunday, October 9. Then AZ is the opponent at the Galgenwaard stadium.