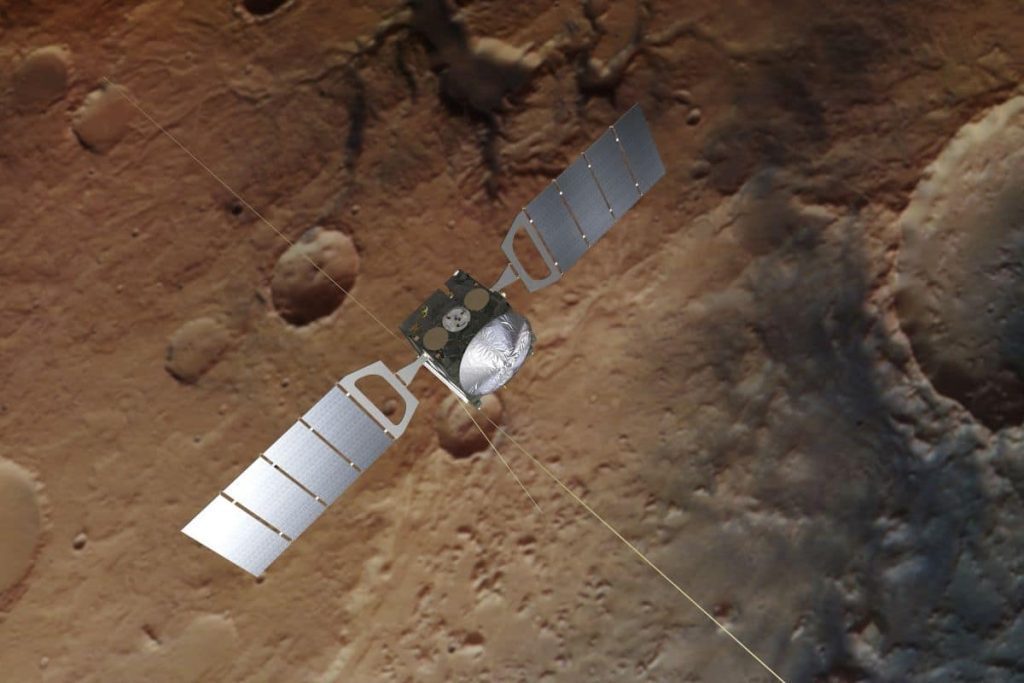 Mars Express’ MARSIS instrument will receive a major software update that will allow it to observe even better beneath the surface of Mars and its moon Phobos.

It has been nineteen years since Mars Express, an unmanned space mission to the planet Mars, was launched. Meanwhile, the orbiter has been studying our closest neighbor for nearly two decades and has revolutionized our understanding of the Red Planet’s history, present and future. One small thing: the software running the Mars Express instruments is a bit dated now. And so, ESA plans to make a series of upgrades that will significantly improve the performance of the orbiter.

MARSIS Instrument
The plan is to update the spacecraft’s MARSIS instrument. This instrument played an important role in finding signs of liquid water on Mars. For example, MARSIS spotted a suspected saltwater reservoir about 20 kilometers wide, buried under 1.5 kilometers of ice in the south polar region.

How does the MARSIS instrument work?
MARSIS bombards the Martian surface using a 40-meter antenna with low-frequency radio waves. Most of these radio waves are reflected from the surface. But significant amounts pass through the crust and are reflected off deeper layers made up of various materials, including ice, soil, rock, and water. By examining these reflected signals, scientists can map the structure below the surface of Mars, down to a depth of several kilometers. In addition, it allows them to study certain properties, such as the thickness and composition of the polar ice caps and the composition of volcanic and sedimentary rocks.

But the MARSIS instrument could again benefit from some attention after almost two decades of research. “After years of successful science, we want to advance the performance of the instrument,” said Andrea Cicchetti, who leads the software update.

Windows 98
However, it is still not so simple. “We had to overcome a number of challenges to improve the performance of MARSIS”, adds engineer Carlo Nenna. “Particularly because the MARSIS software was originally designed more than 20 years ago based on Microsoft Windows 98!

software update
In short, even on Mars, Windows 98 is now obsolete. And so MARSIS will undergo a major software update. This includes a series of upgrades that will improve signal reception and data processing. This will greatly increase the quantity and quality of scientific data sent to Earth. “Previously, we relied on a complex technique that stored a lot of high-resolution data,” says Cicchetti. “As a result, the instrument’s internal memory quickly filled up. But from now on, we can throw away data that we don’t need right away. This allows MARSIS to take measurements five times longer and explore a much larger area in one go.

Martian South Pole
The software update will allow Mars Express to better observe beneath the surface of Mars and its moon Phobos. And it’s promising. For example, the team intends to subject the Martian south pole to another inspection. “Here we have already seen signals pointing to liquid water,” said ESA researcher Colin Wilson. “With the new software, we can survey these regions faster and more thoroughly in high resolution, to confirm if water can indeed be found. It’s really like equipping Mars Express with a brand new instrument after almost 20 years.

Despite the advanced age of Mars Express, the team believes the orbiter will be around for quite some time. “Mars Express and MARSIS are always very busy,” said ESA’s James Godfrey. “The team did a great job designing the new software. And that allows us to continue to get the most out of this experienced spacecraft. »