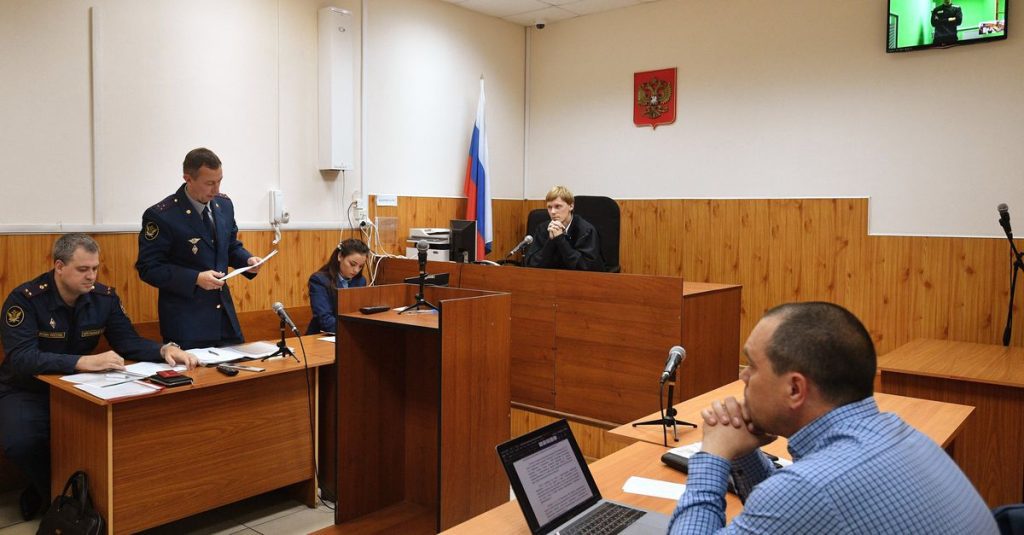 Russia’s leading opposition politician has shrunk to a postage stamp-sized figure within months. Even in the small courtroom in Kovrov, a town 250 kilometers east of Moscow, viewers have to squint to see Alexei Navalny properly on the small television screen. Through the only window he is still allowed to see the outside world, the politician imprisoned since last year looks gray and emaciated.

In this cramped room, judge Kirill Nikiforov, a thin and pale young man, deals with the complaints that Navalny tirelessly files against the Russian prison system FSIN concerning the degrading treatment he receives at the penal camp IK-6, notorious for his tortures. methods. There are four Russian journalists and two foreigners in the room.

Walking for a few seconds without your hands behind your back: five days of isolation. Unbutton: three days

Navalny, 46, is not allowed to attend the hearing. He is to remain at the prison camp in the nearby village of Melechovo, where he was transferred this spring to serve a nine-year sentence for “fraud and contempt of court”. According to his supporters, the sentence was personally ordered by President Putin to silence his main national opponent.

The latter has not yet succeeded, as it turns out on this first day of December. After being transferred this summer from a camp in nearby Pokrov, Navalny was put to work. Since then, he has sat on a low stool behind a sewing machine for seven hours a day. It’s not a position that his long body condones, nor what FSIN safety rules dictate. “A seamstress position (sic) must be equipped with an office chair with a reclining back,” defends Navalny.

In order to improve not only his own working conditions, but also those of his fellow prisoners, the exasperated politician decided in August a syndicate set up for the prisoners, that he Promzone mentioned. “The Kremlin wants its Gulag to be made up of silent slaves. And here I am ! Instead of asking for forgiveness, I demand respect for the law,” he wrote on Twitter in mid-August. As expected, the bold move was immediately crushed by prison management and a torture started for the politician who still continues.

Since his union initiative, Navalny has spent his days in ShIZO, the harshest form of solitary confinement in the Russian penal system. Prisoners are not allowed to bring food or personal items, only read or write for an hour a day, and the bunk on the wall is collected during the day, so rest is impossible. “It’s an unventilated niche, 2.5 by 3 meters, where even the cobwebs never move. Usually it’s wet and cold, but lately it’s been very hot. At night you feel like a fish out of water, out of breath,” he described his cell on Instagram last month.

Instead of asking for forgiveness, I demand respect for the law

Due to the maximum legal stay in the ShIZO of fifteen days, the IK-6 keepers have come up with a trick. Once Navalny’s period of solitary confinement is over, a new offense is designed to re-incarcerated him the same day.

On August 12, the day after the announcement of his union project, an observant guard noticed that the buttons of his – too small – prisoner’s suit were not closed all the way up: three days of isolation. A week later, he didn’t have his hands on his back for a few seconds while walking: five days in solitary confinement. Citing a judgment of the European Court of Human Rights: twenty-one days. Refusal to wash a fence (“painting, I still understand that, but washing is bullshit”): fourteen days. Not cleaning the yard: seven days.

At the end of November, when the mercury dipped well below zero, he was the only one in the camp who did not receive winter boots. In court, it becomes clear that just before the start of the hearing, Navalny must again go to solitary confinement for eleven days, because a guard had seen him without an overcoat at five o’clock in the morning.

Although the endless taunts are meant to psychologically and physically break the prisoners, they only seem to make the stubborn Navalny more determined. “I’m not going to hide it, isolation is hell, there’s really nothing pleasant about it. But there are more important things in life than comfort. I don’t care. how long I have to sit here. I will not betray my ideals or my supporters,” the politician said.

This session also shows that for someone who now spends 78 days continuously in a 3.5 by 2 meter bare cell, the inmate makes an exceptionally combative impression. With the same piercing sarcasm that brought him international fame, he throws an inconsistency into the course of justice before the judge across the screen.

“Your honor! What kind of nonsense is that?! There are 322,000 prisoners in Russia, the vast majority of whom work. That’s more than worked on the pyramids of Egypt! I want to end this modern slavery , but ever since I raised this issue, I can’t get out of the solitary cell!” he shouts as he flips through the papers on the table in front of him. “Everyone knows you earn a lot of money. money with prisoners in Russia. But I’m not even allowed to know anything!”

face of the opposition

With his fight against corruption, his harsh criticism of President Putin and his clever use of social networks, Aleksej Navalny (1976) has become the face of the Russian opposition in ten years. In 2020, he was poisoned with the nerve toxin novichok during his election campaign. He barely survived the attack and recovered in Germany.

He returned to Russia in early 2021 to resume his fight against Putin, but was previously arrested at the airport and sentenced to 2.5 years in a prison camp for failing to comply with the reporting requirement imposed on him during an earlier conviction. Last March, nine additional years were added for “massive fraud and contempt of court”.

The young judge grinds his teeth. His words are barely audible, but he keeps his head down. It is not he who determines the course of events, but his superiors who in turn act on instructions from the Kremlin. They are far from tired of the legal battle. Navalny risk another prison sentence 30 years for “incitement and financing of terrorism and extremism” and “rehabilitation of Nazism”. The latter because of a comment by his right-hand man Leonid Volkov, who fled the country in 2019, which appeared on Navalny’s YouTube program Popular politics said that “[generaal] Stauffenberg was right when he wanted to kill Hitler.

Solitary as he is, Navalny is not alone. From abroad, his wife Yulia and her team of employees attract international attention. He is assisted in court by lawyers Vadim Kobzev and Olga Mikhailova. They are the only ones with whom contact – sporadic and behind glass – is authorized. But this right is also increasingly restricted by prison authorities. The exchange of documents is now prohibited. In September, the parlor window was covered with a thin sheet of aluminum, so that Navalny can no longer see his lawyers and the documents become illegible. From now on, Navalny’s messages, which continue to fill his social networks, must be transmitted verbally. Thus, the Kremlin increasingly cuts him off from the world, hoping that the world will forget about him.

For their own safety, the two lawyers hardly talk to reporters about Navalny’s condition. Especially since the FSB security service last week a new set of censorship rules ratified, which makes exchanging information with the press even more risky. Approached after the hearing, Mikhailova still wants to say something about Navalny’s strategy to file a complaint on the assembly line. “No prisoner dares to do that, everyone knows complaining only causes more problems,” she says. The politician has little choice. Staying alive and attracting attention is the only opposition Navalny can face.

A version of this article also appeared in the newspaper of December 5, 2022