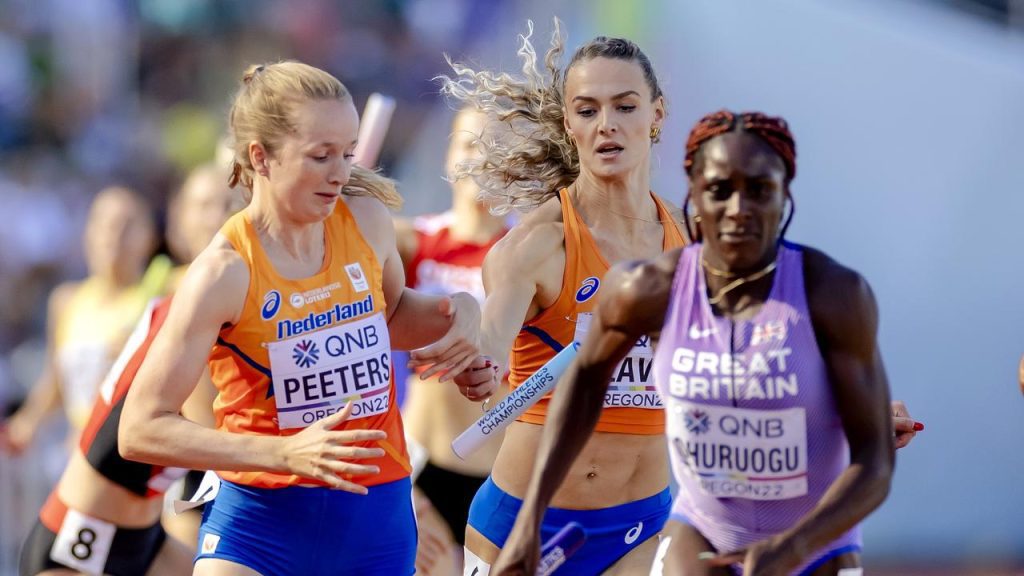 The Dutch women’s relays were disqualified from Saturday to Sunday from the 4×400 meters at the World Championships in Eugene. During the exchange between Lieke Klaver and Cathelijn Peeters, the baton fell and the rules were violated during the replay. Moments later, the Dutch missed the final battle by a hundredth.

Peeters continued his run after a messy substitution, after which the Netherlands finished third in 3.28.58, mainly thanks to an impressive catch-up run from Femke Bol. The United States won the series in 3.23.38.

Third place would be enough to advance to the final, but a few minutes later the jury decided that the result for the orange team should be overturned.

After starting runner Hanneke Oosterwegel and Klaver, the Netherlands have already taken third place, but things have gone wrong. World Cup debutant Peeters took over for Klaver and held him down briefly, but let him down again.

The stick rolled away a bit, after which Peeters picked it up and continued. It was against the rules. Peeters should have taken a step back where she had let go.

Slideshow: The bad switch from the Netherlands in the photo

The Netherlands were among the contenders for a medal

Due to the incident, Peeters was far behind, but closing runner Bol passed three countries in the final part and crossed the line in third.

The euphoria and relief were enormous, until the Dutch riders heard on the screen at Hayward Field Stadium that they had been disqualified.

Along with Bol and Klaver, who already took silver in the mixed 4×400 meters on the opening weekend, the Netherlands were among the medal contenders in the final, which begins on Sunday without a Dutch quartet due of disqualification.

Thanks to a great catch-up run from Femke Bol, the Netherlands finished third.

The men also miss the final in dramatic fashion

On the night of Saturday to Sunday, it also went wrong with the Dutch relays in the 4×400 meter series. The team finished fifth in Eugene.

Isayah Boers, Terrence Agard, Nick Smidt and Ramsey Angela then had to wait and see if their time from 3.03.14 was still good enough for a place in the final and it turned out not to be the case. France was hundredth fastest with 3.03.13 and thus secured the last ticket for the final battle.

Missing the final is a huge disappointment for the Dutch side after the surprising silver medal at the Tokyo Games a year ago. Then Liemarvin Bonevacia, Tony van Diepen, Agard and Angela qualified for the final. The relay team also won the world relays for the first time last year, but could not continue that success in Eugene.

Final runner Ramsey Angela in action in the series.