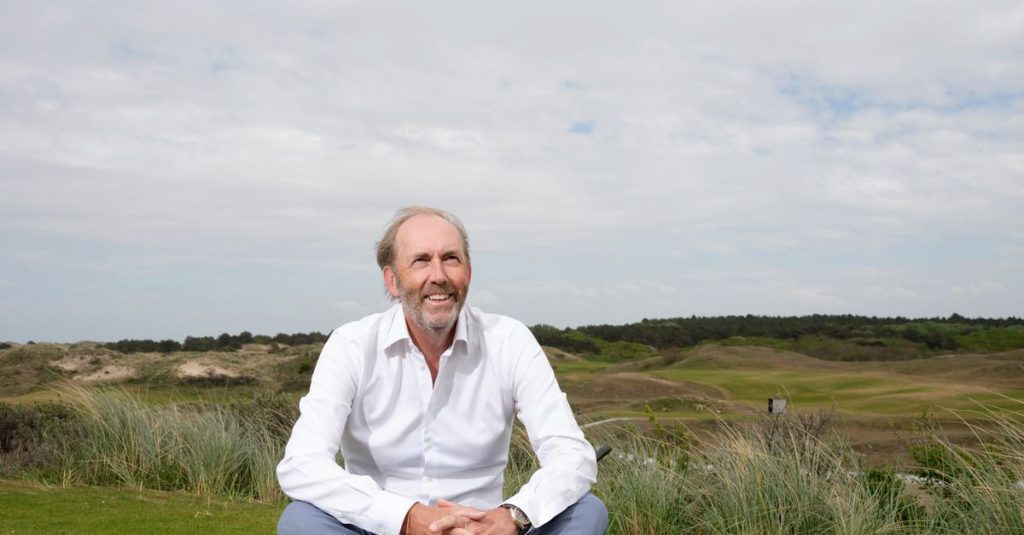 When Daan Slooter enters the clubhouse of the ‘Noordwijkse’, he has a golf club in his hand. An old one, which is clearly seen in the discoloration of the iron and the leather handle. There’s a story behind this mid-iron, he says, but that’s for later. Have a drink first. It goes without saying that it hosts the place where he started playing golf at the age of 11. He turned out to have a knack for sports that would determine his life. “I only golf.”

As well as being a TV commentator for Ziggo Sport, Slooter (54) is co-owner of a company that deals with the business side of golf in the Netherlands and has been tournament director of the Dutch Open since 2004. starts this Thursday in Cromvoirt and is the subject of an interview. As for Slooter, the conversation took place on a nine-hole course, but the journalist is not a golfer.

Is playing golf together your way of communicating?

“Most people would like to play in Noordwijk, because it is one of the most beautiful golf courses in the Netherlands. I can offer them this opportunity. And I try to play golf more often on a date, I play too little. But above all, I think it’s a good way to get to know each other. Better than sitting at a table with such a recording device.

The 102nd edition of the Dutch Open will be played from Thursday to Sunday on the Bernardus course in Cromvoirt. The defending champion is Sweden’s Kristoffer Broberg. The prize money is 1.75 million euros, including more than 290,000 euros for the winner.

The Belgian Thomas Pieters is the best ranked of the participants in the world ranking (36th). Other eye-catchers are 21-year-old Danish twin brothers Nicolai and Rasmus Hojgaard, together good for five tournament wins on the DP World Tour, as the European tour is now known.

In addition to the four players from the Dutch circuit Joost Luiten, Wil Besseling, Daan Huizing and Darius van Driel, ten other compatriots are in the game.

Golf as a social activity.

“Yes, I can do that very well, but then I often play less well because I’m too busy with other people. I don’t care, but the reactions at the time yes. Either they said “this Slotter can’t take it anymore” or people suddenly thought they could play golf as well as I could.

In his younger years, there were few golfers at the same level as Slotter. At the age of sixteen or seventeen, he was in the world’s top ten among youngsters, although no official list can prove it, he says. At international tournaments he competed with the likes of Colin Montgomerie, José Maria Olazabal and Jesper Parnevik, now acclaimed professionals with a full trophy cabinet and millions in the bank. Slooter opted for a scholarship to the United States in the mid-1980s, he then studied economics at Duke University in North Carolina. And after that he did not turn professional.

Do you regret this choice?

“I didn’t really have a choice. Physically, I was not strong enough and at the time the maxim in the Netherlands was: no bodybuilding. It was bad for your flexibility. I played so much between thirteen and eighteen that my body couldn’t take it anymore. My short game was brilliant, I could last a long time with that. When I came back to the Netherlands in 1989, I tried for another year, but the holy fire was gone.

You were born prematurely.

“Now I would have turned professional for sure. At the time, you had to be in the top thirty on the European tour to break even. Now there are many more smaller circuits and golfers can take five years to get somewhere.

Your golf experience will come in handy now that you are a Tournament Director. Is your role comparable to that of Richard Krajicek at the Rotterdam tennis tournament?

“I think so. The field of play is my concern. In tennis, you have to be number one, two or three in the world for an attractive poster, I have to ensure a nice and wide field of participants. I try to bring out a player from the top 15, from the top 20, a few from the top 50, plus a few players that people flirt with. The former big winners, for example. And of course the Dutch are important.

A lot of work, more than one hundred and fifty players participate.

“We arrange flights, hotel rooms or whatever is necessary for thirty players. The rest will come. We have contractual agreements with around five people. It’s really a game to bring in those five. My pace is a bit different now because we’ve moved from September to May but I’ll start in Dubai in January there I talk to all the players and their managers that way I get an idea of ​​what the players want players and an image forms in my head.

And then it comes to the starting money.

„I sometimes have Martin Kaymer [voormalig nummer 1 van de wereld] arranged in exchange for a hotel room. In Saudi Arabia there is a tournament with $7.5 million starting, so I can do it. I haven’t collected this in all these years. We have to rely on fit and measure, relationship building. If I took the players by name, I gave their management five hotel rooms and five flights. They could give this to other players in their stable who normally never receive anything. So they had a stronger bond with those players and those players with us. This could be important as they improve. Mine balancing act is: the later I sign players, the less it costs. »

Are you satisfied this year?

Yes, because it’s such a strange time. There are plans for a new Saudi tour which will not allow players from the US tour to participate. It creates uncertainty and it has an effect on what I do. Our field was supposed to be announced in March, but no one picked up their phone. Normally there will always be one or two players playing full time on the US tour. »

Finally, the history of this former golf club.

“I came across this on the internet for a few bucks. This is actually a center iron of George Pannell, the first winner of the Dutch Open in 1912. Chances are he also played in that tournament, as there is no has no grooves on the blade. They only arrived a few years later.