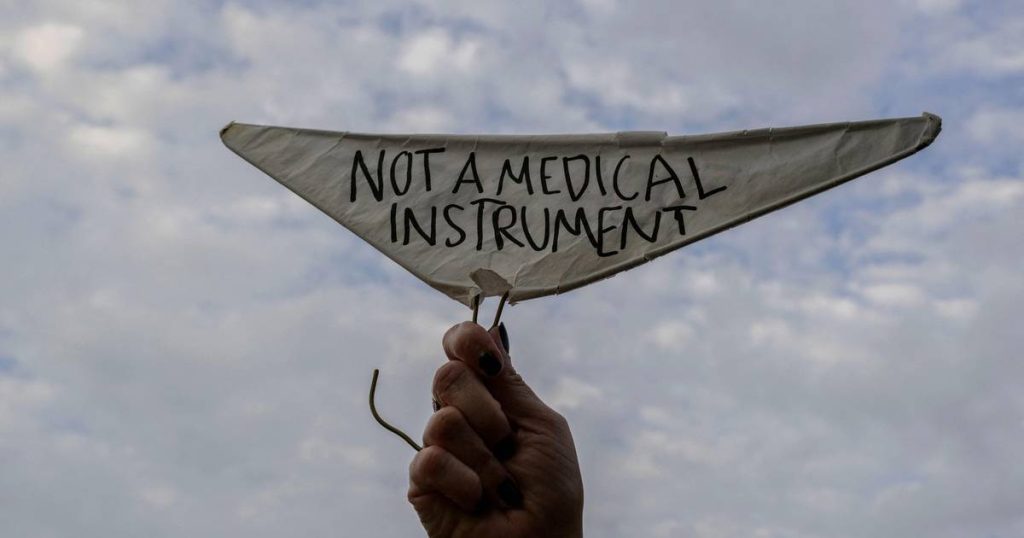 with videoAfter nearly 50 years, the constitutional right to abortion is coming to an end in the United States. The United States Supreme Court has overturned the landmark decision in Roe v. Wade. US President Biden calls it a “tragic mistake”. Missouri has now banned abortion.

This 1973 case gave women across the United States the right to abortion. The fact that the Supreme Court has now overturned this decision means that women no longer have the constitutional right to have an abortion. Abortion is likely to become illegal in half of US states after this ruling.

In response, President Joe Biden said it was “a sad day for the country and the Supreme Court.” “Let’s be clear: the health and lives of women in our country are at stake,” he added, calling the decision a “tragic mistake” made in the name of “extreme ideology.” stripped of a constitutional right that is “fundamental” to many Americans.

In the conservative-dominated Supreme Court, five of nine justices voted to remove the state’s right to abortion. The court considered the case in response to a strict abortion law in the southern state of Mississippi. It is now up to the US states themselves to determine whether abortion is legal.

Now that abortion is no longer a fundamental right in America, some states are not hesitating: 13 states have immediately started procedures to make abortion illegal. This also began to apply immediately to 5 states. Soon women from the states of Idaho, Utah, Wyoming, North Dakota, South Dakota, Oklahoma, Texas, Louisiana, Missouri, Arkansas, Mississippi, Tennessee and Kentucky.

Missouri banned abortion hours after the Supreme Court ruling. “Missouri has just become the first country to effectively end abortion,” Attorney General Eric Schmitt said on Twitter. “It is a monumental day for the sanctity of life.”

California took the lead that same evening: In the capital Sacramento, Newsom signed a new law that shields California abortion providers from civil court rulings in other states. It is “one of more than a dozen abortion-related laws he will enact in the near future,” the governor’s office said.

The three Democratic-appointed court justices said in a joint statement that they disagreed with the decision. “Whatever the exact scope of future laws, one result of today’s decision is certain: the curtailment of women’s rights and their status as free and equal citizens,” they write. “It is with sadness, in this court, but more so for the millions of American women who today have lost fundamental constitutional protections. We disagree.

Nancy Pelosi, Speaker of the United States House of Representatives, says she finds “this cruel statement outrageous and heartbreaking”. Former President Barack Obama (2009-2017) speaks in response of “attacking the essential freedoms of millions of Americans”. He calls the decision “the result of the whims of politicians and ideologues who downplay someone’s most intensely personal decision.” American companies such as Disney, Netflix and Microsoft have announced that they will reimburse their employees for travel expenses if they had to travel to have an abortion.

Trump: ‘God made the decision’

Former President Donald Trump welcomes the US Supreme Court’s decision. “This is in line with the constitution and the rights are returned, which should have been done much sooner. It puts him back in the states he’s always belonged to,” he told Fox News. When asked if he thought he had a role in the decision-making after appointing three conservative judges from the Supreme Court during his tenure, the former president told the news channel, “God made the decision.”

Comments from around the world

Meanwhile, international reactions to the decision are disappointed. Tedros Adhanom Ghebreyesus of the World Health Organization, WHO, said: ,,I am very disappointed because women’s rights must be protected. And I expected America to protect those rights. Prime Minister Boris Johnson (UK) speaks of a “big step backwards”. French President Emmanuel Macron has called abortion a “fundamental right of women that we must protect”.

His Belgian colleague Alexander De Croo: “Banning abortion never leads to fewer abortions, only to more unsafe abortions. And Justin Trudeau (Canada) strongly opposes it and speaks of “horrible news”. “No government, politician or man should tell a woman what she can and cannot do with her body,” Trudeau said.

UN human rights chief Michelle Bachelet said the decision was a blow to women’s human rights. “Access to safe, legal and effective abortion is firmly anchored in international human rights law,” Bachelet said. She says it empowers women to make their own choices about their bodies and their lives.

The Vatican welcomes the Supreme Court’s decision. The decision challenges the world to reflect on the issues of life, according to the Pontifical Academy of Life, which is part of the pope’s administrative apparatus. But the Vatican is also calling for social changes to help women keep their children.

“Black day for people with a uterus”

The leading abortion provider in the United States, Planned Parenthood, vowed on Friday that despite the Supreme Court’s ruling, it would “never stop fighting” for those in need. “We know you are feeling a lot right now – pain, anger, confusion. Whatever you feel is fine. We are with you and will never stop fighting for you,” tweeted the organization.

According to The Guttmacher Institute – an American organization that also fights for the right to abortion – 26 states will ban the right to abortion, 13 of which will soon pass laws to make it a reality. In Washington, California and New Mexico, among other places, abortion should remain legal.

The Dutch Baas organization in Eigen Buik calls it “a black day for people with wombs around the world”. She says she is “shocked, furious and sad”. “It is a catastrophe for the self-determination of people with a uterus. It also reminds us of the vulnerability of abortion law, also here in the Netherlands,” according to the organization.

You can answer at the bottom of this article. Only comments with a full name will be posted. We do it because we want a debate with people who stand up for what they say and put their name to it. If you still need to enter your name, you can do so by clicking “Login” at the top right of our site.