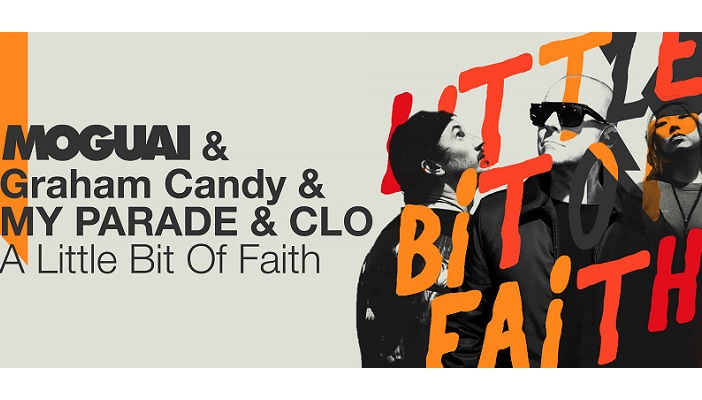 Today we have a really nice scoop here on Maxazine, being the new music video for My Parade (Graham Candy) and Moguai. “A Little Faith” came out today and of course you’ll see it here for the first time. You may remember MOGUAI from ‘Beatbox’, which he performed as Dial M For Moguai, My Parade is the new collaboration between Derek Ullenboom and Graham Candy.

André Tegeler (MOGUAI) released his first mini album, ‘Best Before End’ in 1994, after which he performed the track as Dial M For Moguai ‘Beatbox‘published. The hit was the first instrumental track to remain number 1 on the German charts for 10 weeks. Moguai then worked with Giorgio Moroder, Dimitri Vegas, Beyoncé, Tone, Loc, BBE, Sugababes, Britney Spears, Fatboy Slim, Robin Schultz, Kelly Clarkson and Girls Aloud, but also with Dutch toppers such as Zonderling, Afrojack and Tiësto.

It’s catchy pop music with an electronic twist that combines the addicting melodies of Graham Candy and the instrumental magic of Derek Ullenboom. Hailing from New Zealand and Canada, they met in Berlin in 2016. Since then, they have performed and written individually with some of Europe’s best EDM artists such as Alle Farben, Robin Schulz, Younotus and Deepend. Until they meet in Winterberg, during the White Pearl Mountain Festival.

My Parade was created when Graham and Derek performed an improvised DJ set during a mountain top snowstorm at the White Pearl Mountain Festival. Now they are ready to present their own musical blizzard to the general public. My Parade is the meeting of two worlds.

The duo are happy to be able to collaborate with none other than the legendary MOGUAI (aka Dial M for Moguai) on their latest track ‘A little bit of Faith’. The collaboration can be considered the biggest collaboration in the field of EDM in 2021.

Today the clip is out, of course here on Maxazine: