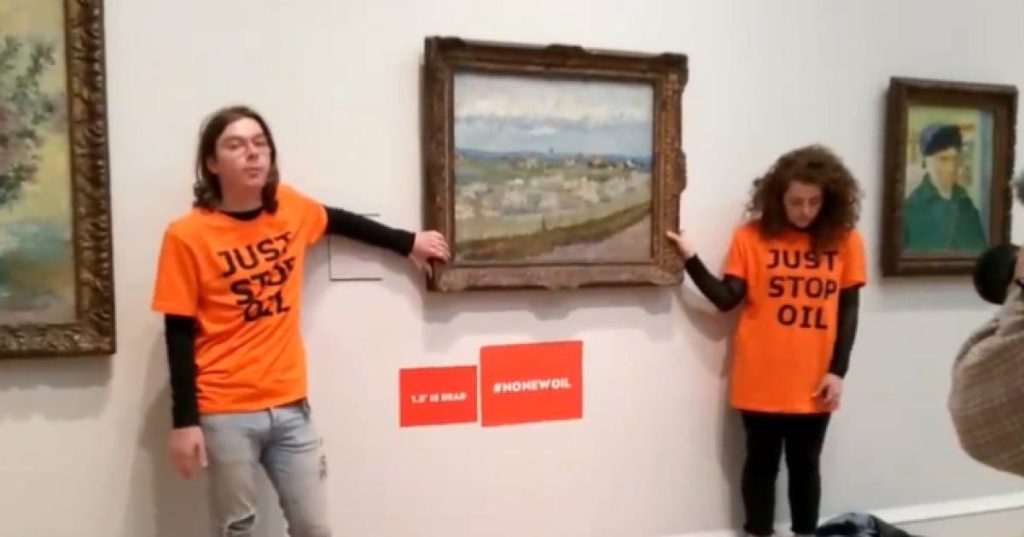 Two environmental protesters in Britain stuck to the frame of a painting by Vincent van Gogh on display in a London art gallery on Thursday. The duo wanted to make a statement against oil and gas extraction and asked the museum to join their resistance.

In this stunt, the ‘Just Stop Oil’ band duo stuck their fingers to the Dutch master’s ‘Peach Blossoms’ painting. The work on canvas, painted in 1889, is part of a Van Gogh collection on display at the Courtauld Gallery in the British capital.

“We don’t want to do that,” campaigner Louis McKechnie told viewers at the London gallery. “We are stuck on this board because we are terrified for our future,” the 21-year-old added, noting that he and his fellow activist expected to be arrested. “If there had been another way to get the change we needed, we would have done it. We have tried everything else.

The Courtauld confirmed the incident happened mid-afternoon and prompted the gallery where the painting hangs to be closed for the remainder of Thursday. “We expect the Courtauld Gallery to reopen to the public as usual tomorrow,” the statement added.

McKechnie, a former engineering student who was arrested 20 times and spent six weeks in jail, is fast becoming one of the most recognizable faces among Britain’s climate change campaigners. In March, he tied himself to a goal post during a game between Newcastle and Everton.

He told AFP earlier this month that he was ready to become “public enemy number one” through his climate actions. “My generation has no choice but to take this kind of action,” he added.

Watch all of our climate change videos below: