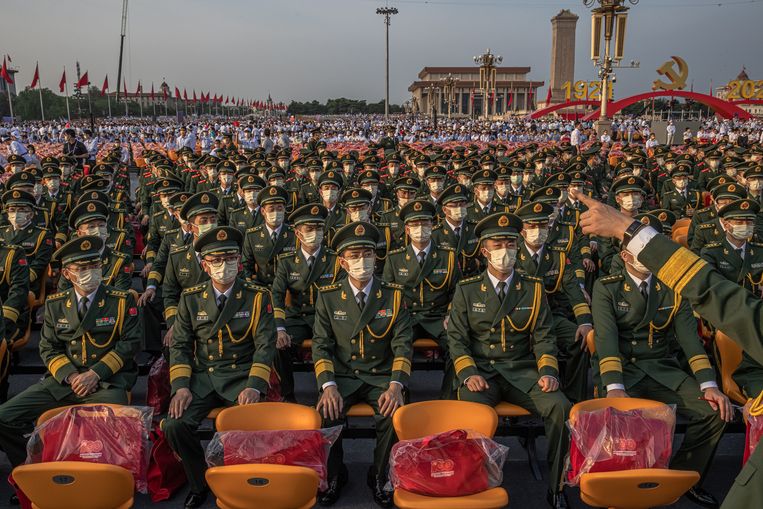 “The 100 years since the founding of the Party have proven that without the CCP, there would be no rebirth of China,” said Xi Jinping, party chairman and head of the military. He stands on the balcony of the Heavenly Peace Gate, wearing a gray Mao shirt and speaking for 65 minutes. “History and the people have chosen the CCP.

Xi uses the anniversary to link history and the future. It teaches how China under the CCP has turned from a remote, poverty-stricken country to an economic powerhouse, and how this predestines the CCP to lead China further. According to Xi, China has completed the first part of its development this year (a moderately prosperous society), the second part should follow by 2049 (a modern socialist state). This is only possible with the CCP.

It is not a surprising speech, but rather a collection of his well-known ideas, but with an extra fierce nationalist touch. “China will never again allow it to be intimidated or oppressed by foreign powers,” Xi said, referring to Western countries which increasingly clash with China. He doesn’t seem to want to be complacent. “Anyone who tries will be in a bloody collision with a Great Wall of steel with a population of 1.4 billion.”

The 70,000 spectators in Tiananmen Square – delegations from schools, businesses and associations – enthusiastically applaud and wave their red flags when they hear it. On television, he produces beautiful images, alternating between endless crowds and enthusiastic faces in the front rows, where members of the Young Pioneers and the Communist Youth League sit. These young party supporters have been training for months before this day and are fond of enthusiastic looks.

More towards the back of the square, it is much less lively. Viewers greet, clap, and clap on command whenever a camera walks past, but they look rather disinterested. During Xi’s speech, some even fall asleep. They are far from the action and the big video screens turn their backs on them. More than spectators, they are extras, filling a television set which must convince the rest of China and the world.

What may be a factor is that many have barely slept due to the extreme security measures. Journalists had to assemble at 2:45 a.m., five hours before showtime, to go through numerous baggage and identity checks. Liquids, food and – for Chinese spectators – telephones are prohibited. Some even have their ballpoint pens removed (liquid ink!) For a party that claims to be widely loved, it’s remarkable how anxious it is.

But even though many spectators do not seem very enthusiastic, they are happy to attend this historic celebration, as it can only work well in China. Jiang Feng, a businessman who has lived in Europe for a long time, has a photo taken with a giant hammer and sickle in the background. He is not a member of the party, but knows that good relations with the party can help in the business world. “China is getting more and more powerful,” he said. “The party gives us a sense of pride.”