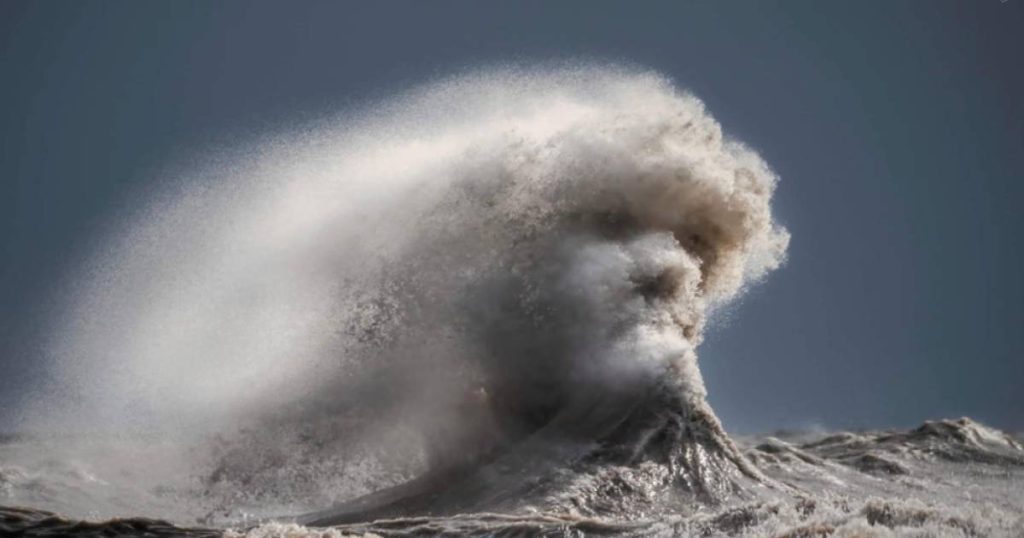 Of the more than 10,000 photos Canadian photographer Cody Evans took of raging waves earlier this month, one immediately caught my eye. He managed to take a snapshot of a wave that appears to have a man’s face. The spectacular photo therefore reminds Evans of Poseidon, the Greek god of the sea.

For the past two years, Canadian Cody Evans has been making regular trips to Lake Erie in the Canadian province of Ontario to take pictures of the waves. Earlier this month, the nature photographer wanted to capture some new footage. “It was very cold, around -11 degrees,” he told the Canadian press. “I watched the water and as soon as there were waves I took a series of photos.” According to Evans, the waves were up to twenty feet high that day.

When the photographer looked through his photos a few moments later, he noticed that one of the waves appeared to have a face. “I was really satisfied. You often see all sorts of things in waves and clouds, but it was surreal to have it so clearly on screen. This photo definitely stood out,” Evans said.

But how to explain this phenomenon? According to Canadian meteorological expert Daniel Liota, the giant wave is due to “November winds”. These are storms over maritime areas that have a force of more than 64 km/h. “The Great Lakes are relatively warm at this time of year compared to the air above. This leads to very violent storms over the water,” he told Canadian broadcaster CBC. . Due to the strong gusts of wind, there are of course also more waves. However, the phenomenon is not uncommon, underlines the expert: “It comes back every year.

Evans is determined to make even more striking images. “I will have a camera in my hands until I can’t hold it anymore, I really like it.”