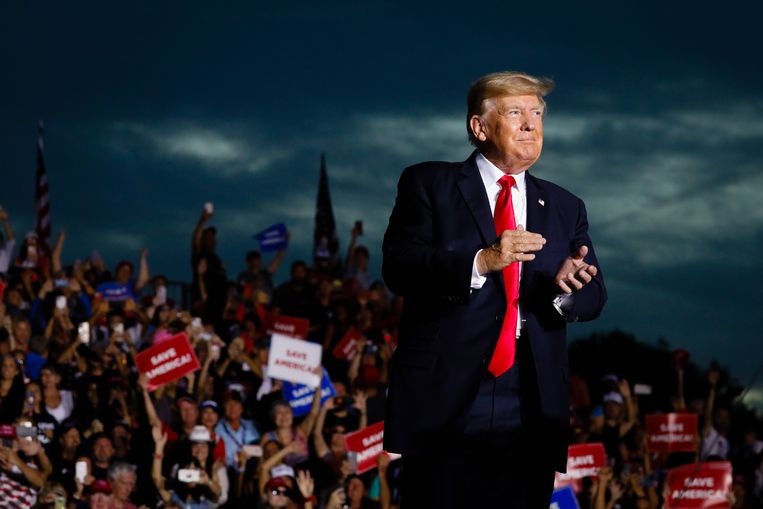 Trump is excited to “bring together” again: On Saturday he garnered usual attention in Florida. What does that say about him?

– First of all, we can say that he is bored. Trump is an artist who likes to see himself in the spotlight. This is the best way to do it. Moreover, it is said that he did not disappear from the scene, literally or figuratively. He still claims to be president and could run for president again in 2024.

What is he talking about in such a gathering? 2024 is still a long way off.

“On the one hand, he complains about the results of the elections in 2020, on the other, he defends himself against the lawsuit that has been opened against his company in New York.

“The gatherings have always been a bit of a lament for him, presenting himself as a victim. He can go all the way now. There is a kind of double witch hunt against him, he claims. He views both the electoral defeat and the trial as a conspiracy, as establishment or “deep state” actions to hinder it.

“So there aren’t many substantive themes on the program. It is above all complaining about one’s enemies and naming one’s friends, such as members of Congress who remain loyal to him.

What is the lawsuit against him about?

“Mainly because of the gifts that his company would have given to employees, without paying tax on them. A house, a car, school fees for the (grand) children, that sort of thing. These are all fairly minor allegations, initially made against his company and CEO Allen Weisselberg. Trump himself is not yet officially in sight.

“The prosecution may use this case as a springboard to reach the main characters. For example, there is speculation that Weisselberg would testify against the Trump family at some point. It seems so far away wishful thinking. If you look at which lawyers Weisselberg hired, he’s totally on the defensive.

“If it stays with these allegations, I don’t think it’s very likely that Trump himself will be affected. To be found guilty of tax evasion, you must prove that you know what you are doing. Trump said yesterday he did not understand how these taxes work. It sounds really silly, but it’s a useful defense. He can wash his hands in all innocence.

Why could the prosecution hope for more?

“Of course, we cannot examine the papers and documents available to the prosecution. It’s clear that Trump does his bookkeeping creatively. From research by the The Washington Post And particularly The New York Times As it turns out, Trump adjusted his income up and down for fifteen years: to evade taxes, to get loans. ”

Still, it is suggested that Trump could end up in jail for the matter.

“We often think of Trump: now we have it. But in the end, he’s gotten away with business his entire career. For example, ignorance was also an effective strategy to investigate Russian interference in the 2016 election.

“The question is whether the prosecution dares to take such a step. The loyalty of its supporters is still unprecedented. This trial only strengthens his position. This is further evidence of the establishment “witch hunt” targeting this alien. A conviction would only fan the fire.

Also with by Volkskrant we’ve written less about Trump in recent months, now that he’s no longer president. Yet he is undeniably still an important factor in American politics. How seriously should we take his grieving?

Trump has gotten smaller because he is no longer president, is no longer on Twitter, and receives less attention from the “mainstream” media. He seems to have lost influence in this regard, but in the background he is still a strong, dormant force. More than ever perhaps. The party cleared him of inciting the Capitol uprising and even refused to investigate. Many Republicans refuse to recognize Biden as president. Confirmation of Trump’s leadership role within the party did not actually come until after his presidency.

Trumpism is still the mainstream within the Republican Party. And there are not yet any candidates who are as Trumpist as Trump himself. Nothing happens in the party without Trump’s approval.

Its influence has become almost institutional. In the past, he had to speak loudly at rallies or on Twitter to get the party online. Now this is done automatically. The party’s few dissidents face strong opponents in order to gain one hundred percent loyalty to the Great Leader. It should therefore always be taken very seriously.

You will soon be leaving as a correspondent in the United States, but it looks like your successor Maral Noshad Sharifi will write a lot about Trump.

“I think of Trump, but mostly Trumpism and how it affects society. Things have calmed down on a purely political level now, with a more predictable president and more predictable lines. It’s zest. Trump dispersed a lot of noise that didn’t hit the nail on the head. Many of these parts can be retroactively disposed of.

Fortunately, my successor does not have to keep all eyes on Trump. You risk missing out on the larger flows of American society. Ultimately, Trump is not an exception, but a symptom. The deeper causes are at least as interesting to describe as Trump himself.

And when are you leaving?

“We are going back to the Netherlands in August. Tonight our last July 4th, still beautiful. Moving trucks will arrive later this week. Then we go on vacation to western America for a few more weeks. Towards Wyoming, Yellowstone National Park, between bison and bears. It was a destination that was always high on our wish list, especially for our children. A classic American ending. ‘