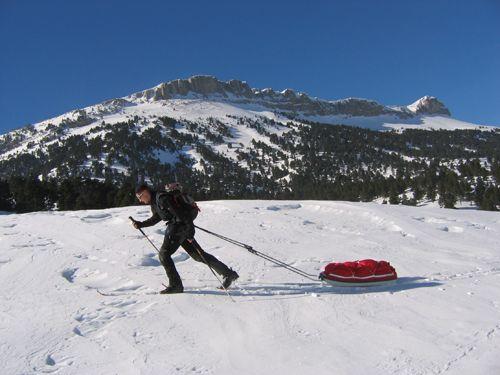 Yesterday Gilles Denis (29 years old) and Nathan Goffart (28 years old) left for Greenland. The people of Brussels will complete a five-month triathlon on ice using a ski pulka, a sea kayak and they will do a so-called ‘Big Wall’ ascent. Along the way, they will collect all kinds of scientific data.

The people of Brussels are convinced that a world first is being prepared with their ice triathlon. They want to cross an ice cap on a 600 kilometer ski pulka ride along the Arctic Circle, then they want to descend 1,000 km by sea kayak along the east coast of Greenland, and finally they want to move 1 km in height via a new climbing route.

The adventurers, who will be on the road for five months, do it for sport and adventure, but they also have scientific missions.

For example, they must carry out measurements for the Royal Observatory in order to compare them with satellite data. The goal is to get a more accurate picture of ice sheet height patterns.

For the ULB, the people of Brussels will take snow samples and for the University of Liège they will study the annual accumulation of snow along the Arctic Circle.

The people of Brussels named the adventure Nanok Expedition, in reference to the word ‘nanoek’ which means polar bear in Inuit. But the expedition is not without danger. The ice caps are very cold and deserted, and the coast is very irregular.

The two adventurers were therefore supported by specialists in each discipline and polar explorers such as the Belgian Dixie Dansercoer, who has now passed away.

“Nanok Expedition is an ode to life, to adventure, to nature,” it seems. “And it’s proof that on our planet – which is saturated with people and infrastructure – there are still pristine and wild places that can be explored, but above all must be protected.”