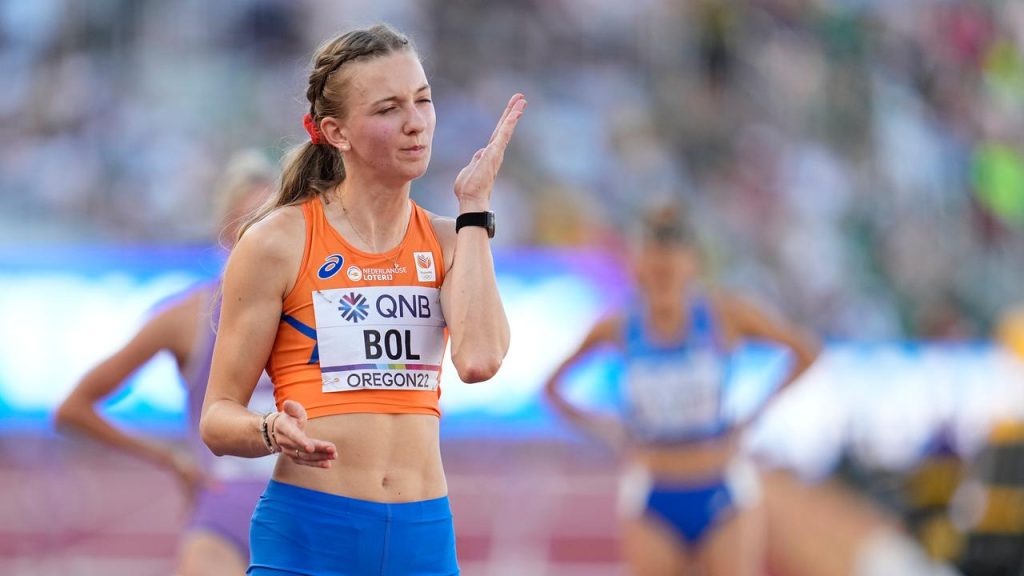 A year after the Olympic bronze in Tokyo, Femke Bol wants to win silver or gold in the final of the World Championships in Athletics in Eugene on Friday. The task is tough – she must face the two best athletes of all time in the 400 meters hurdles – but not impossible. “Femke is in the shape of her life.”

The ten best times ever in the 400 meters hurdles have only three names: Dalilah Muhammad, Sydney McLaughlin and Bol. And those three will face off for the world title on Friday at Hayward Field Stadium in a head-to-head showdown.

It will be Roger Federer, Rafael Nadal and Novak Djokovic against each other, but on an athletics track. “Exactly, it’s not a crazy comparison,” says Laurent Meuwly, coach of the Dutch 400-meter runners. “They are the top three 400-meter hurdlers of all time.”

In the United States, they see it a little differently. Now it’s mostly McLaughlin, the American who won gold in Tokyo with a world record 51.46 seconds. She recently tightened that world best time to 51.41 and now the country is hoping for another world record in the final battle in Eugene.

US media describe McLaughlin, 22, as “a once-in-a-generation talent.” She appears in all respects to be the successor of her compatriot and rival Muhammad, the 2016 Olympic champion, ten years her senior, but even faster. Meuwly: “It could be another world record for McLaughlin on Friday. A time of 51.30 or 51.20 is possible.”

Dalilah Muhammad, Sydney McLaughlin and Femke Bol after the Olympic final in Tokyo.

“Sydney and Dalilah bring out the best in me”

It’s only been 27 days since McLaughlin set a world record for the second time in a year. These are times when Bol, 22, is still a long way off. “But that doesn’t scare me because I know how good Sydney are,” Bol told Eugene on Wednesday after the semi-finals. “I know her talent, I know how hard she works for it.”

The question is how realistic is the idea that Bol will beat McLaughlin in Friday’s final. She will probably have to run faster than she has ever done to have a chance of winning gold. “I know Sydney and Dalilah bring out the best in me. I have to run my own race and hopefully they push me further in the last part. Then I can have a great time.”

The last time it was a confrontation between Bol, McLaughlin and Muhammed, at the Tokyo Games, this also happened. Bol achieved a personal best with 52.03 and with that also a Dutch and European record. But Muhammad and McLaughlin were better.

In the semi-finals in Eugene, Bol has already run faster than Muhammed, who is working on the last years of his career. But the gap with McLaughlin remains significant. Meuwly: “On paper, Femke doesn’t have a big chance of beating McLaughlin. But on the track it can be a different story. With the top three athletes side by side, anything can happen.”

Muhammad, Bol and McLaughlin in the Olympic final.

“Bol needs to get McLaughlin out of his comfort zone”

Meuwly draws his hope from the fact that McLaughlin is not used to racing against his Bol generation. In youth tournaments, Amersfoortse mainly acted on the 400 meters, after which she only switched to hurdles in 2019. She proved to be a natural talent. In two years, Bol rose to the top of the world, but without direct clashes with Muhammad and McLaughlin. The American duo only organizes competitions on the American continent and not in Europe.

Meuwly: “Femke has to make sure she gets Sydney out of her comfort zone. That way she can beat her. A moment of doubt can change the situation. So Femke can take her chance.”

Bol himself says he is particularly looking forward to the battle with Muhammad and McLaughlin. She wants to dive under 52 seconds in the final, but she is less frank about the medals, even less about the color. “But believe me, Femke is hungrier than ever,” says Meuwly. “It was a conscious choice. Last year she had a busy schedule ahead of the Games as she needed to gain experience. She needed to learn what it was like to be in a game. of the Diamond League as the favorite and to win.”

Bol now has that experience. “As a result, we can organize a calmer competition program in 2022. More time for specific training, which means that Femke is now technically better than during the Games. She has improved in all areas. And she is in the shape of his life. Yes, I expect Femke to run faster than in Tokyo on Friday. Hopefully that’s enough to beat Muhammed and McLaughlin.”