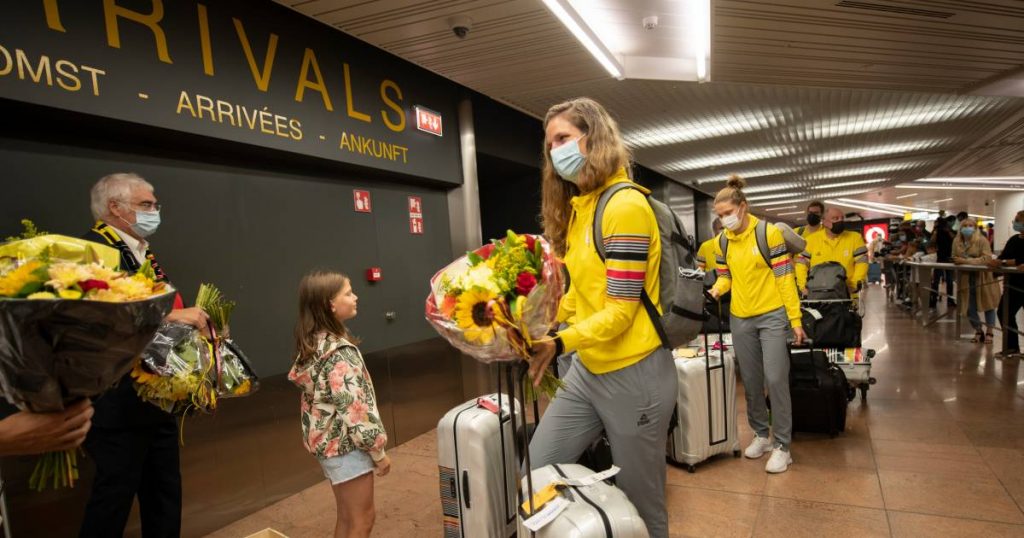 UpdateBelgian broadcaster VRT has suspended sports presenter Eddy Demarez. The reason is the derogatory statements by Demarez, among others, about the orientation of women in the Belgian basketball team. The players demand the resignation of Demarez.

VRT had previously ruled that the sports reporter was no longer allowed to comment on sports competitions and live broadcasts and said it would consider “whether and how Demarez can return to work in the coming weeks.” Flemish Media Minister Benjamin Dalle is counting on the broadcaster to “take the appropriate measures”.

Yesterday there was a commotion over a fragment of the broadcaster’s Facebook livestream on the arrival of Team Belgium, including the basketball team known to our neighbors to the south as the Belgian Cats.

In an unguarded moment – when the cameras continued to roll, but the commentators themselves were no longer in the picture – other matters arose. During the conversation you can hear how some people, including sports journalist Eddy Demarez, are speculating on the orientation of women in the basketball team. Name jokes are made and some women are described as “a man” and “a colossus”.

The Belgian basketball association and the players themselves issued a statement on Sunday evening demanding the resignation of Demarez. They also consider whether legal action is necessary.

“At Basketball Belgium and The Belgian Cats, the question is whether someone with such opinions can still act credibly as a presenter and figurehead of our public broadcaster. We are convinced that the answer to this is ‘no’, and we therefore urge Demarez to resign as a journalist, and if he refuses, that the VRT would terminate his employment contract, “said the union and the national team in their press release.

Demarez’s statements about our Olympic athletes are unacceptable to them. “This is not only very offensive to The by Belgian Cats, but also to a much wider audience. His words touch all those who experience discrimination, not only in sport, but also beyond. Discrimination and mental well-being are two themes that deserve special attention in the world of sport. Every day, we see that there is still a lot of room for improvement. Basketball Belgium is therefore examining with the players whether further legal action is necessary. ‘

The clip toured Twitter last night, where it was immediately criticized. ,, Unpublished statements on Belgian cats behind the scenes, live streaming. The public apology from Eddy Demarez and the editors is more than appropriate, ”he sounded.

In an internal email to VRT employees, broadcaster Frederik Delaplace now says Demarez has been put on hold, which is also confirmed by VRT itself. “We will see in the coming weeks if he can return to work and how.” Delaplace considers it particularly reprehensible that all the work accomplished by the sports channel in recent weeks during the Olympics “is now called into question by a series of unacceptable statements from an employee”.

According to Delaplace, there is no room in public broadcasting for discrimination, hatred and slander about the way people live their lives. VRT does not distinguish between people on the basis of their gender, religion, skin color or sexual orientation. Not on screen, but not behind the scenes either. Respect for everyone can and must be and must remain a distinctive quality of public broadcasting. We don’t compromise and set the bar higher than anyone else.

Max Agency, the management office that oversees a number of actors, also reacted with outrage. “As the management office of many professional athletes and basketball and volleyball athletes, we have learned with dismay, deep disappointment and undeniable anger at the audio fragment in which some of our players who are part of the Belgian Cats have been completely misplaced and cheaply. insulted and humiliated by people supposed to comment only on their sporting exploits, ”writes Max Agency on Facebook.

The office also finds it “disgusting” to determine that damage can still be done in this way today. “And this at a time when the media are talking about the importance of respecting more and better the mental well-being of athletes. “

“We will raise this issue further and await appropriate responses from the relevant authorities, which should go far beyond the usual and trivial first apologies. On behalf of our athletes, we will ensure that the injustice done to them is recognized and that the necessary debate on this subject does not quickly fade away, ”concludes Max Agency.

VRT distanced itself from the statements in an official response yesterday, and has already said Eddy Demarez will temporarily no longer comment on live broadcasts. Below is the full answer:

“By broadcasting this afternoon the tribute to the returning Olympic medalists via Sporza’s FacebookLive channel (VRT’s sports channel, editor’s note), sports journalist Eddy Demarez spoke inappropriately about the Belgian Cats. The video channel remained open and even though Eddy was out of sight, the inappropriate comment was clearly heard. Sporza and the VRT are distancing themselves from this state of affairs. This is totally against the positive policy that the VRT wants to pursue. VRT will speak to Eddy and in the meantime he will no longer comment on the shows Such statements cannot be tolerated.

In the euphoria after honoring the returning medalists, I made statements in a private conversation that seriously crossed the line

Demarez himself also reacted: ,, In the euphoria after the honor of the returning medalists, I made statements in a private conversation which seriously crossed the line, “he rings.

“I never intended to offend anyone because of their gender or orientation. It is doubly regrettable that these statements are a stain on the Games which have been very successful for Team Belgium and Sporza. I would therefore like to sincerely apologize to the Belgian Cats and their team as well as to all those who feel offended, challenged or neglected by this. I asked the Belgian Cats to personally send them my apologies. I will learn the necessary lessons from it and ensure that it does not happen again in the future. “

Flemish Media Minister Benjamin Dalle responded today on Twitter: “Homophobic and offensive statements have no place on social media, in cafes or on the public broadcaster. Nowhere. The greatest respect for the Belgian Cats and for their Olympic performances.

According to the minister, what happened is unacceptable and Dalle is convinced that the VRT has taken immediate action. It is now up to VRT itself to see how the public broadcaster will follow up on this internally, the minister said through his spokesperson, but Dalle is counting on appropriate action to be taken. It is up to the VRT management to decide what these measures are.

earlier fired the Greek public broadcaster ERT fired one of its commentators after a racist comment. Dimosthenis Karmiris targeted the narrowed eyes of a South Korean athlete during a table tennis match at the Olympics.

Jeoung Young-sik had just beaten Greece’s Panagiotis Gionis in the third round after a thrilling seven sets. The guest commentator on duty was asked why South Koreans generally excel in the sport. “I also don’t understand how they can see that bullet fly back and forth so quickly with their slanted eyes,” was the tactful response.

Watch our videos on the Olympic Games here: