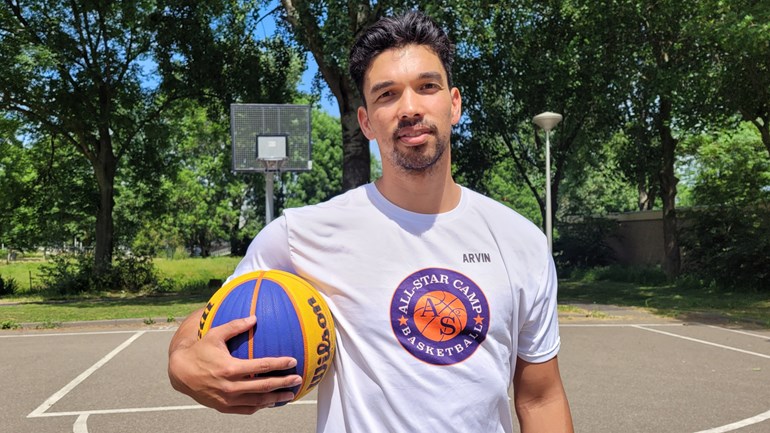 Whatever the outcome, Slagter and his teammates achieved a historic feat in late May by becoming the first Dutch basketball players to reach the Games. And also in a sensational way, by winning, among others, against the United States, by far the best basketball country in the world.

Is he still on a pink cloud? “No, certainly not,” Slagter replies with a smile on a basketball court in Lupinesingel in his hometown of Alphen aan den Rijn. “The real goal of course is to make it to the Olympics and that’s imminent very soon. But we certainly celebrated it.

His record as a basketball player in the Eredivisia is simply impressive. Six times national champion, including two times with ZZ Leiden, five national cups and five Supercups. In 2014, he was even elected most valuable player (MVP), or best Dutch basketball player.

As an Orange international, participation in the European Championship in 2015 is as high as possible. In October 2019, Slagter will switch from five-on-five to so-called 3×3 basketball. There he represents the Netherlands with Dimeo van der Horst, Julian Jaring and former ZZ Leiden player Jessey Voorn.

In 3×3 basketball, two teams of three players compete on a half court with a single basket. Matches last ten minutes, or until a team has 21 points. Unlike five to five, there is no three-point line, but a two-point line. Outside this line, a score is worth two points, inside one point. A team consists of four players, of which only three can be on the field at a time.

Why did you embark on this adventure?

“Because I had a childhood dream of going to the Olympics. I was lucky to have also been able to be international five to five for the Netherlands. Unfortunately, it was never really realistic to get to the Games. With three on three there was a real chance and that was also why I switched to 3×3 basketball. ‘

This discipline is a relatively late discovery for you. What makes 3×3 basketball so fun?

“It is a very young sport and in strong development. Compared to the traditional five-on-five, this is a great addition. You can do it anywhere, you need very limited space. In addition, it is very fast. It’s flashing, it’s gone from the first to the very last second. And it’s short, so it fits very well with this zeitgeist. ‘

“Plus, it can be used in the most beautiful places around the world. A few years ago, the World Cup took place on the Rembrandtplein in Amsterdam. The next European Championship will be played at the foot of the Eiffel Tower. Once I am in a shopping center and I have to warm up between the traders, the other time all the facilities are there. As far as I’m concerned, there are no limits to the possibilities, that’s what makes him so cool. ‘

Most athletes with an Olympic dream have been working there for years. They often follow a trajectory of four years, sometimes even longer.

“For me, it’s been a little over a year and a half. I think my five-to-five experience has helped me transition very quickly. Certain things are fundamentally different. I also believe that to do one well, you have to say goodbye to the other. This dynamism and clarity enabled us to achieve this result. ‘

“When you’ve played 15 years in the same league at one point, things get more similar. I really like the 3×3 challenge, because it’s a different structure. In a way, you’re a lot more independent. . The coach is not allowed to coach during the match, which means you really have to do it as a foursome. ‘

What is your role within your team?

‘It varies. It also depends on the composition we are in. In general, one of my greatest strengths is shooting from behind the three point line, which in 3×3 basketball is a two point line. At the same time, it is also an accompaniment. But in the end, we have to do everything together. If the four of us fight and are on the same page, we can have a positive result in every game. ‘

You are leaving for Japan next month. What mission do you get on the plane with?

“The goal is to perform well at the Games. And I hope to leave with a medal, preferably a gold one. I think that’s realistic, considering there are eight teams there. And I think we’ve shown that we can compete with the best in the world, with the performances we’ve had lately. So I don’t think there is any reason not to aim for that.

The next Games are in three years, then you will be 38 years old. Will this be your one and last chance for Olympic glory?

“Never say never, but you probably will. That’s why I started chasing this dream with the 130 percent. It was the opportunity and we have taken it so far. Now it’s important to give him a very good follow-up in Tokyo. ‘

So is it now or never?

“As far as I’m concerned, yes.