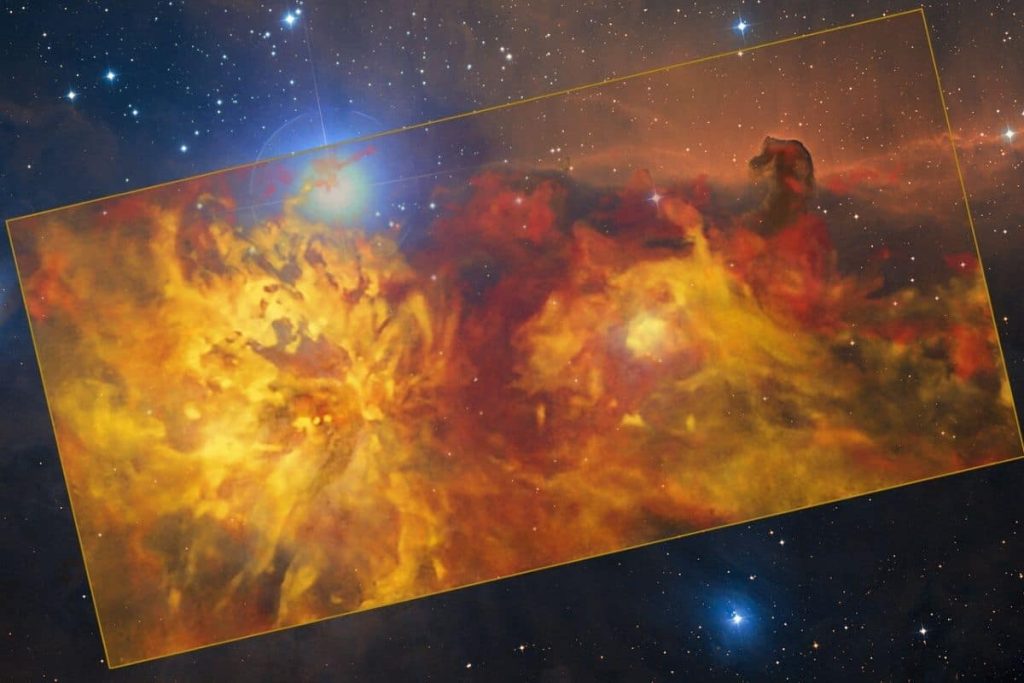 Did you think you already had the fireworks display for this year? So take a look at this photo!

ESO has released a stunning new image of the Flame Nebula; an emission nebula located in the constellation Orion. And the images are spectacular. The photo shows beautiful yellow-orange colors, making the image absolutely true to the name of the nebula.

Vlamnevel
Orion is one of the most famous regions of the night sky. Here are the nearest gigantic molecular clouds – colossal cosmic complexes composed mostly of hydrogen, in which new stars and planets are formed. These clouds are located between 1300 and 1600 light years from Earth and include not only the most active star nursery near our solar system, but also the Flame Nebula pictured below. At the center of this emitting nebula is a collection of young stars that illuminate the surrounding gas with their high-energy radiation.

Cold ice
Contrary to what the “fire” would suggest in this photo, the clouds photographed are freezing; their temperatures are only a few tens of degrees above absolute zero. The Orion ‘fireplace’ is therefore not as hot as on earth, but freezing!

The Flame Nebula is the large spot to the left of the large yellow rectangle. The smallest spot on the right is the reflection nebula NGC 2023. Top right NGC 2023, the famous Horse’s Head nebula appears to emerge heroically from the “flames”. The three objects are part of the Orion Cloud, a giant gas complex located 1,300 to 1,600 light years away.
The different colors indicate the speed of the gas. The Flame Nebula and its surroundings are receding from us, with the red clouds in the background moving faster than the yellows in the foreground. Image: ESO / Th. Stanke & ESO / J. Emerson / VISTA. Acknowledgments: Cambridge Astronomical Research Unit

In addition to the Flame Nebula, the spectacular photo also shows smaller nebulae, including the famous Horse Head Nebula; one of the strong points of the constellation Orion. The NGC 2023 reflection nebula can also be admired in the photo.

New nebula
In addition to the magnificent Flame Nebula and its surroundings, the team also discovered a new nebula. It is a small object that stands out for its almost perfect circular shape. The new nebula was given the name cowhide.

Observations
The new image was taken by the Atacama Pathfinder Experiment (APEX), which is stationed on the cold Chajnantor Plateau in Chile’s Atacama Desert. The Flame Nebula was captured at radio wavelengths and photographed as part of the APEX Large CO Heterodyne Orion Legacy Survey (ALCOOLS). This involves looking at the radio waves emitted by carbon monoxide (CO) in the Orion cloud. SuperCam’s main goal is to harness this molecule to sweep large swathes of the sky, as it allows astronomers to map large clouds of gas from which new stars form.

The stunning image is based on observations by former ESO astronomer Thomas Stanke and his team. They wanted to test the newly installed SuperCam instrument on APEX and directed it to the constellation of Orion. “Astronomers know it: when a new telescope or a new instrument becomes available, you have to look at Orion: there is always something new and interesting to discover! Stanke said. Several years and many observations later, the results of Stanke and his team have now been accepted for publication in the journal. Astronomy & Astrophysics.