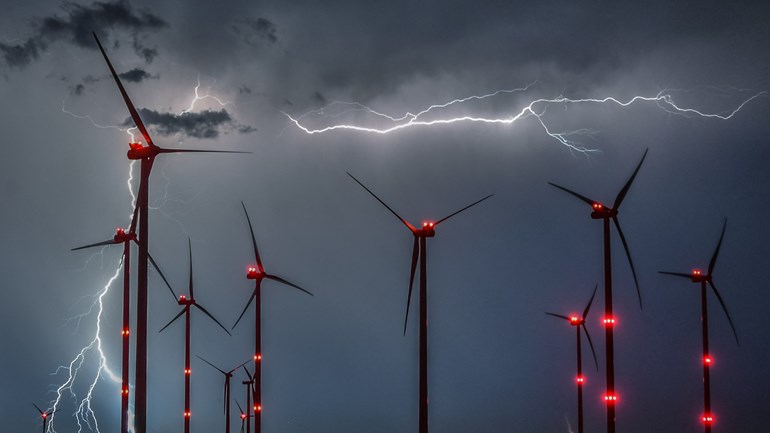 “Lightning is one of the most spectacular natural phenomena, but we don’t understand it yet. We need more fundamental information,” said US scientist Brian Hare, who collaborates with ASTRON researchers on one of the new studies. Hare analyzes the data collected by the LOFAR radio telescope.

Hidden behind the storm cloud

The study of lightning is something scientists have thought about for a long time, but the phenomenon is difficult to measure, says Hare. “Lightning is fast, random, and often hidden behind dark, opaque clouds. Even with high-tech radar, you can often only see parts of the flash light.”

Hare previously participated on behalf of RUG in a major lightning study in collaboration with ASTRON. Using measurements with the LOFAR telescope, whose heart is located at Exloo, he succeeded in showing how lightning emerges from a storm cloud. He made 3D illustrations with the sharpest resolution.

“LOFAR is the best measuring instrument in the world”

LOFAR offers many possibilities for the American. This is why the scientist joined ASTRON. “LOFAR can see through clouds using radio technology. It does not suffer from the opacity of clouds, as radio waves pass through them right through. LOFAR is also extremely fast and has a large measurement area. . I am not exaggerating when I say that LOFAR is the best measuring instrument in the world for studying lightning. “

In the new study, Hare continues to analyze the origin and growth of lightning. He can use the LOFAR update that ASTRON is working on: LOFAR 2.0. This upgrade allows the radio telescope to measure even more accurately and faster than it currently is. It is also focusing on the development of new algorithms to better interpret the data from the telescope.

The results of research are therefore important in explaining the phenomenon of lightning. But the new research is more relevant than ever for another reason: “Climate change,” Hare says. “It is likely that this will lead to more lightning in the years to come. It is not 100% certain, but due to the high temperatures we will have more energy, more thunderstorms and storms and so probably more lightning. “

Hare also points to the development of green energy. “Knowledge of thunderstorms is also necessary for alternative forms of energy. We are getting more and more wind turbines and they are sensitive to lightning. If we are to provide better warnings or forecasts, we must first know how lightning develops and travels. An additional grant request is therefore pending for additional research on the influence of lightning on our wind turbines in Drenthe.

The other new research at ASTRON doesn’t focus on Earth’s weather, not even our own sun’s weather. Scientist Harish Vedantham is using the new grant to delve into the space weather of exoplanets. Exoplanets are planets that do not orbit our sun, but orbit another star.

The role of so-called plasma in the context of space weather is important in this regard. “In our own solar system, the sun occasionally emits large amounts of plasma which can damage the atmosphere of planets. This new project uses the LOFAR telescope for the first time to detect similar plasma repulsions from planets orbiting around other stars. “

According to Vedantham, our earth is not affected by these plasma eruptions because it is protected by a magnetic field. But the big question is whether other planets such as exoplanets have such a shield as well.

“So far, we haven’t been able to determine a magnetic field on an exoplanet,” says Vedantham. “Now that we know approximately how many planets there are, we can take a closer look at their characteristics such as surface and atmosphere.”

This is part of a much larger puzzle that is being put together in the search for the possibility of life on another planet. “Answering this question is a decades-long challenge, because a lot has to come together before life on a planet as we know it is possible.”

“Such observations were not possible until now”

Still, Vedantham believes further steps can be taken. This is due to the capabilities of the LOFAR telescope. “Radio transmission is the only proven technique to our knowledge capable of directly detecting and measuring magnetic fields. Such observations were not possible until now, although we can understand them theoretically. Purely because we didn’t have a telescope capable of picking up all the signals. LOFAR is the world’s most sensitive telescope at the correct frequency. “

The Vedantham team has been preparing this ambitious project for 2.5 years and now it can happen. “We have done conceptual testing and research showing that it is doable. For example, in 2020 we discovered a brown dwarf with LOFAR, a big cousin of the exoplanet. It gives us the courage to now be able to tackle it. this ambitious project. “

Hare is also eager to continue: “Lightning is the Wild West of physics. So little is known about it that anything can happen. Every time I look I see different things. Almost all of us discover new things. the days and with better and better resolution. “