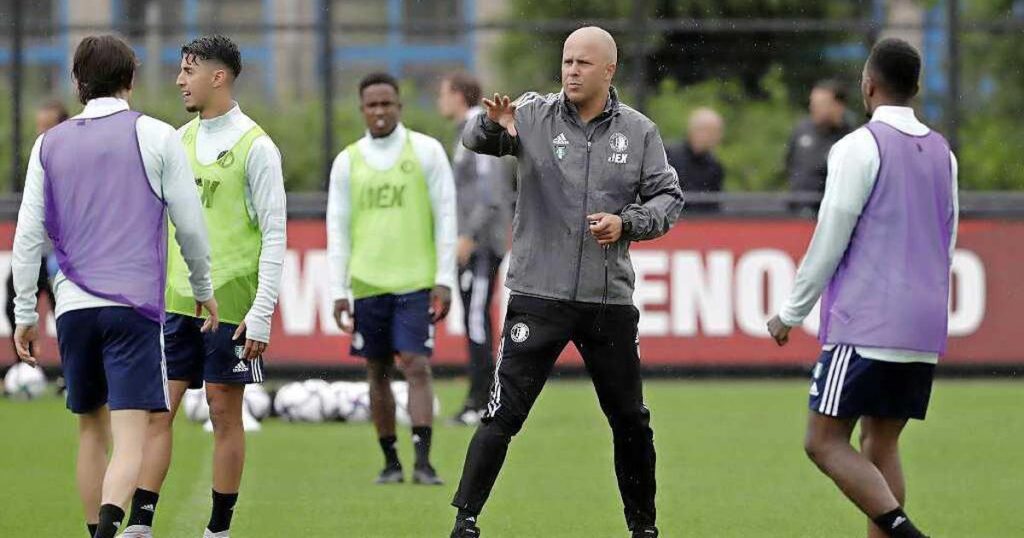 Geertruida is out at the moment due to a knee injury. Guus Til, who is hired from Spartak Moscow for a season, was the most striking name as a newcomer. The midfielder has previously worked with Slot at AZ.

Nick Marsman was on target at Feyenoord. The goalkeeper will soon leave for Inter Miami in the United States, but will be allowed to train in Rotterdam by then. Also Steven Berghuis, Orkun Kökcü and Robert Bozenik were logically not there yet. They are still active at the European Championship, although Kökcü has now been eliminated with Turkey.

Feyenoord started the new season early, as the club are set to play in the new European competition, the Conference League, next month. In it, he plays in the second set against Decic from Montenegro or Drita from Kosovo.

“Start closing the gap with the champion”

Slot did not dare to make any bold predictions after the first training session at Feyenoord. “I can’t really say anything about the expectations for next season. I won’t be able to say anything meaningful about it when we are a few weeks away and have worked with the whole squad, ”said the Rotterdam club’s new coach after his training session in a rainy Varkenoord.

Slot, 42, is the successor to retired Dick Advocaat, who guided Feyenoord to fifth place in the Eredivisie in his last season. “With a significant number of points behind the champion. I think the first task is to close this gap and we are going to work hard on it. Most of the selection has remained intact and it’s basically a good quality team. And I would also like to mention all the clichés: Feyenoord is a fantastic club with a fantastic legion and great accommodation. The training complex is also really great.

“I saw a group of fanatics and it seems logical for a first training. We are far from complete, also because we are still looking for reinforcements, but almost all clubs have them at this stage. The difference is that in a month we will be playing for the ‘echie’, ”Slot said.

The former AZ manager refers to Thursday 23 July, when Feyenoord will play in the Conference League second preliminary round against the winner of the first preliminary round match between FK Decic of Montenegro and FK Drita of Kosovo. “Feyenoord can play dominant, the team showed that in a number of matches last season and I told them they have to recognize what they have done well in those matches. Moreover, it is not the higher mathematics that I desire; the players have to perform their tasks at the highest speed and constantly. You need to be in good shape for this.