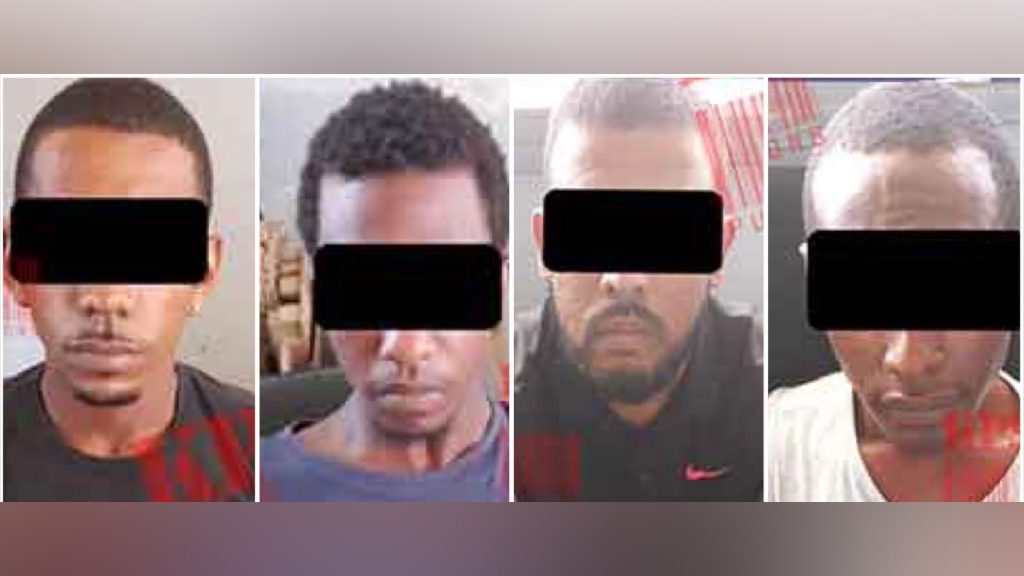 Five men armed with handguns robbed a home annex scrap metal buying business on Nieuwe Charlesburgweg in Suriname on Friday. About 500,000 SRD and 25,000 euros were stolen. The Capital Crimes Department has arrested four suspects (pictured) believed to be involved in the robbery

According to the victim’s testimony, customers come to the site every day to offer their scrap metal for sale, leaving the front door open in most cases.

Shortly before the robbery, the victim saw a white painted vehicle with no license plate backing onto the property. As the workers and their families were outside the accommodations and on the property, the five men exited the vehicle.

After the men exited the vehicle, they held the workers and family at gunpoint. After that, one of the attackers entered the living room and took the money and some personal effects with him.

No one was injured in the robbery. The victim and the workers recognized one of the robbers who had covered his face with a sweater, as one of the former workers who worked there before.

UPDATE: The preliminary investigation established that the driver of a vehicle painted white entered the premises of a company. Five armed men got out of the vehicle, shots were fired and they held the workers and owner at gunpoint, Suriname police said.

A large amount of money in Surinamese dollars, euros and US dollars was captured. Hours after the robbery, Capital Crimes has Inus A, 35; Revelino M. 33 years old; Shawn M. 26 and Rockey K. 19 arrested.

The four suspects were taken into custody after consultation with the public prosecutor.
The investigation into this case is continuing.