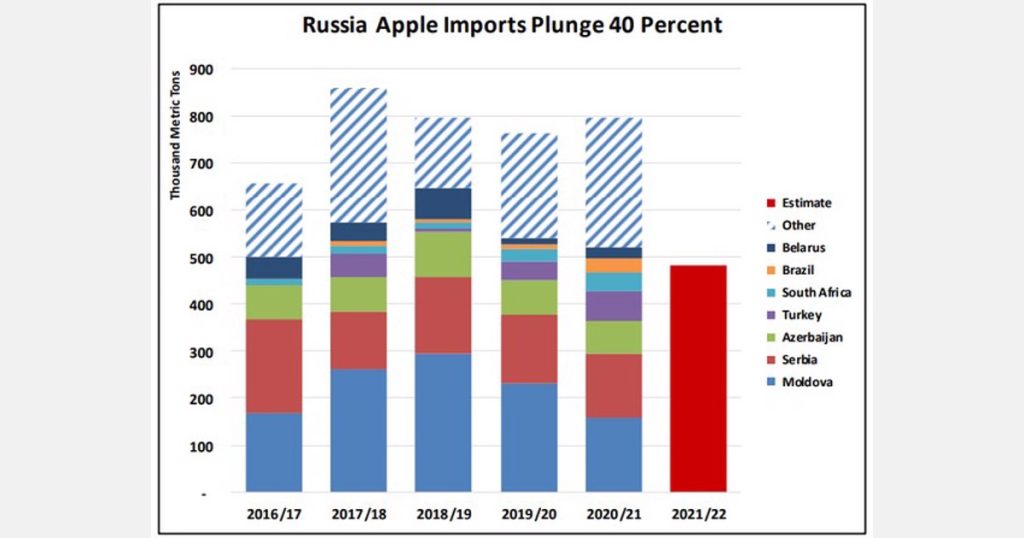 The global apple harvest is expected to rise by 1 million tonnes to 81.6 million tonnes in 2021-22 as yields in China increase and some EU member states recover from weather damage from last year. Imports are expected to shift due to lower shipments to Russia.

China’s apple harvest will increase by nearly 1 million tonnes to 45 million tonnes thanks to production from young orchards, although some adverse weather conditions will reduce premium fruit volumes. The area remains practically unchanged. However, some growers are using their land to shift to growing more lucrative fruits, such as cherries. Despite increased availability of poor quality fruit, exports are expected to fall from 72,000 tonnes to 1 million tonnes as Covid-related disruptions hamper exports to some key Southeast Asian markets, such as Myanmar, the Philippines and Thailand. Due to continued shipments from New Zealand and South Africa, imports will remain unchanged at 65,000 tonnes.

The harvest in the EU is estimated at around 11.9 million tonnes, with losses caused by overnight frosts in Italy and France being offset by increased harvests in Poland, Spain and Hungary. Exports will remain almost unchanged at 1 million tonnes, but imports will increase to 335,000 tonnes due to a larger supply from Chile.

In the United States, the harvest is expected to fall by 170,000 tonnes to 4.3 million tonnes. This is the lowest level since 2012-2013. The drop is due to high temperatures that damaged crops in Washington State and frost damage to crops in Michigan. The USDA’s Agricultural Statistics Service (NASS) revised down its estimate of the harvest in its May 2022 Non Citrus Fruits and Nuts Summary report. The lower availability will put pressure on exports, which will fall from 63,000 tonnes to 715,000 tonnes. This is the lowest level since 2007-2008. Growth in major markets such as Mexico, Canada and Taiwan is offset by contraction in other Asian markets, including India. Imports are expected to increase by 11,000 tonnes to 120,000 tonnes, driven by higher shipments from all major suppliers.