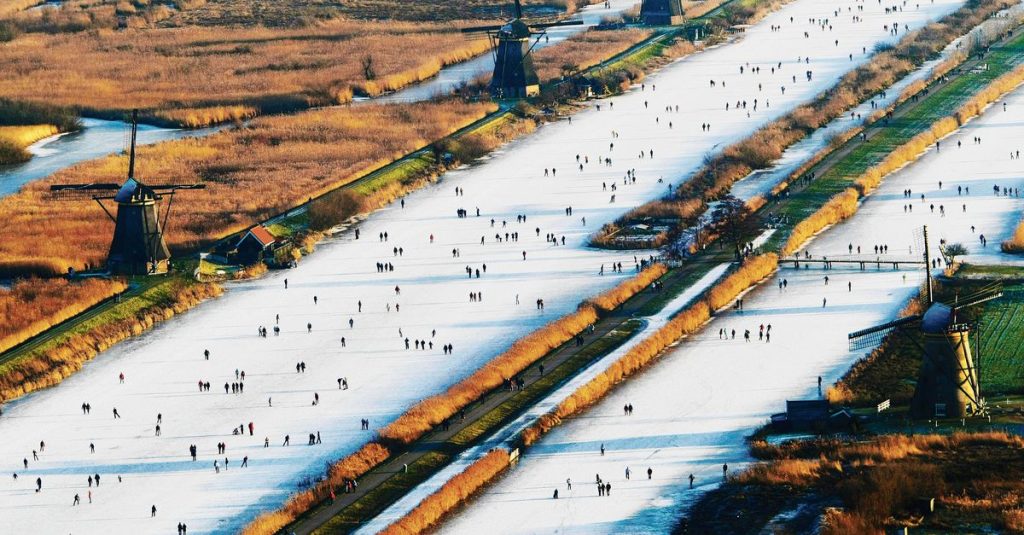 It is called again: the Elfstedentocht. On social networks, meteorologists announce a rare and cold month of January. “Perhaps the coldest since 1823”, writes Marc E. Putto, who presents himself as a weather strategist.

As the Earth continues to warm, the urge for ice skates also seems to increase. And then everything catches the eye. It has been unusually cold in Sweden for a week and a half. Is this a warning sign? And in our own country, the first snow that lasted for some time fell this week. Can the skates already come out of the grease?

Forecasting the weather for January and February through mid-December is usually a hassle. The uncertainties are too great to make meaningful statements. Unless you are dealing with a phenomenon that casts its shadow several months in advance. And it now appears to be the case. A La Niña has been going on since September. It is the counterpart of El Niño. Together they form what is called the ENSO, El Niño-Southern Oscillation. It is a complex phenomenon in the tropical Pacific. El Niño and La Niña occur infrequently, usually once every two to seven years, but sometimes they occur two years in a row, as is now the case with La Niña. Both influence the weather in large parts of the world for months in their own way. “La Niña, for example, causes very dry weather in East Africa,” said Dim Coumou, professor of climatic extremes and social risks at the Free University. “There is a food crisis there.

La Niña also greatly influences the weather in the United States. Mike Halpert, deputy director of the NOAA Climate Prediction Center, wrote: at the end of November a blog on. Based on seventy years of data, he looked at the twenty most powerful La Niña – the current one sits at the lower end of that range in terms of strength. In the southern United States, particularly around the Gulf of Mexico, there is a 70 to 80 percent chance of relatively dry weather next winter. In the northwest, in the Great Lakes region and in the Ohio Valley, there is a greater chance of rain. And in the northwest, the risk of cold is higher. La Niña’s influence on winter temperatures in the United States is less clear than that on precipitation, writes Halpert.

“But for Europe, the influence of La Niña is quite weak”, explains Tim Stockdale, senior scientist at the European Center for Medium Range Weather Forecasts (ECMWF) in Reading. “Because Europe is far from the tropical part of the Pacific. In addition, adds Coumou, weather systems in Europe are relatively complex and chaotic. For example, you have not one, but two jets, a subtropical and a north, both of which influence the weather on the ground from an elevation of 9-10 km. So there are more factors. “This makes Europe the most difficult continent to predict the weather,” explains Coumou.

In any case, the World Meteorological Organization is not predicting a cold winter for Europe. On the contrary. In a November 30 press release she estimates a 50 percent chance above normal temperatures. So just warmer than average. Areas where it is likely to be relatively cold include the northwestern United States, Australia, Southeast Asia, and much of India.

The weak relationship between La Niña and winter cold in Europe is also reflected in Dutch statistics, explains Michiel van Weele of KNMI. He’s putting something in the mail. “The last really cold winter months we had in January 1979, January 1985, February 1986, January 1987”, writes Van Weele. In 1979, there was neither La Niña nor El Niño, the ENSO was then “neutral”. In 1985 there was a La Niña, in 1986 it was neutral, and a year later there was an El Niño. In 1996 and 2012, it was “just not possible” to organize an Eleven Cities Tour. The two years, there was talk of a La Niña. Overall, writes Van Weele, “over the past 40 years there does not appear to be a relationship between the colder winter months in the Netherlands and the state of ENSO”.

But what is this claim on Twitter – arguably the coldest winter since 1823 – based on? The tweet refers to an analysis by the ECMWF. Can Tim Stockdale clarify? He has a suspicion, he later wrote in an email. The ECMWF uses slightly different climate models for its forecasts, ensemble members. Their results vary, so if you put the results together you get a wide range of possibilities. “This reflects the uncertainty.” Every visitor to the ECMWF website can start with these 51 templates. You can also make choices. It appears, writes Stockdale, that the tweeter only used one member of the ensemble. No. 23, to be exact. “It shows that a very cold winter is possible. But by itself, that doesn’t say anything about the likelihood of that happening.

Is there absolutely nothing to say about a possible cold winter and an Eleven Cities Tour in 2022? “It’s still too early for that,” says Van Weele. In general, you can tell that the chances of an Eleven Cities Tour decrease as the earth warms up. Despite this, a period of very cold weather can still occur from time to time. According to Daniela Domeisen, professor of atmospheric predictability at ETH Zurich, these periods now last at most “a few weeks to a month”. And “one of our only chances of such a period,” she said, is when the polar vortex collapses. The polar vortex, also called the polar vortex, is a strong westerly wind in the stratosphere, the layer of air at an altitude of 10 to 50 kilometers. Sometimes the polar vortex is disturbed and the stratosphere warms up locally very strongly in a few days, sometimes up to 50 degrees Celsius. This phenomenon becomes a sudden stratospheric warming (SSW). The sudden warming is downward, first reaching the jet stream at an altitude of 9 to 10 km. The jet stream, which marks the boundary between warm southern air and cold northern air, can therefore become more wavy. On the ground, this in turn can inflate the tongues of cold air to the south. This year, such an SSW occurred in early January. In the Nederlands led it at the beginning of February up to a week of freezing cold. Snowstorm Darcy took care for the first national red code since 2012. Also in February 2018, an SSW caused persistent very cold weather in Northern Europe.

Read about the sudden stratospheric warming of the past year: Dramatic phenomena at the North Pole


When an SSW occurs in the northern hemisphere, it is often in January, February. But can you predict if such an SSW will occur? “This can only be done a few days in advance,” explains Domeisen. The likelihood of large areas in mid-latitudes receiving a cold snap is then much greater. But exactly which areas it is remains unclear.

It’s been a week and a half in Sweden unusually cold. Temperatures of -40 ° C are reached in the north of the country, says Åke Johansson of the Swedish Meteorological Institute, SMHI. But that has nothing to do with La Niña, he says. According to him, this is “just natural variation”.

Whatever must have happened is that the normal westerly wind, which supplies relatively warm sea air, is blocked. “Instead, much colder air is entering the country from the east or the north.”

The West Wind Blockade can have all kinds of causes, he says. He doesn’t yet know what exactly happened. What he does know is that the cold won’t last long.