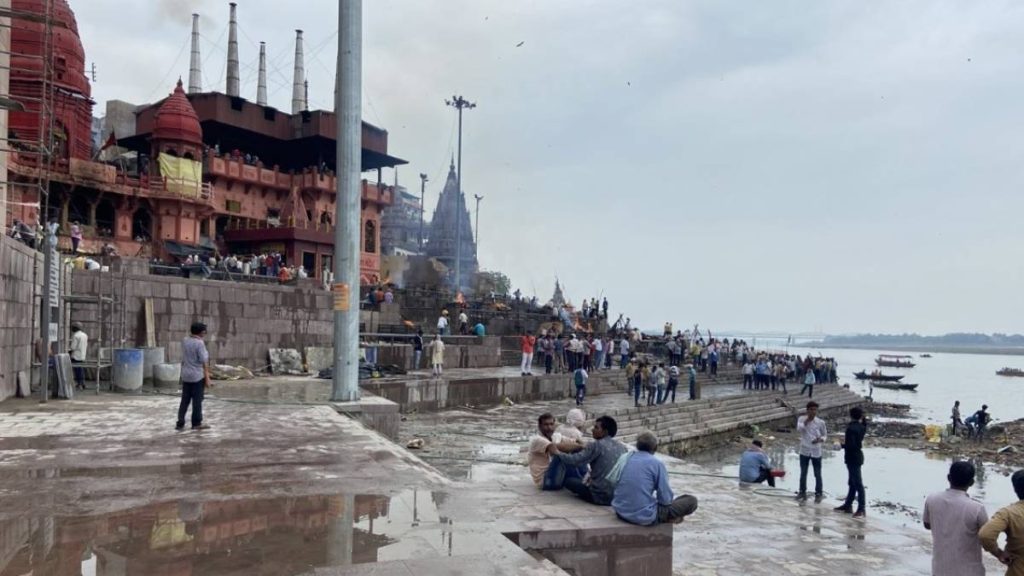 Air conditioning at the ticket office, escalators to the Ganges, reasonably clean toilets and plenty of space. A visit to the 18th-century Kashi Vishwanath temple in Varanasi doesn’t exactly confirm dominant stereotypes in India, such as dirt and chaos, since a major renovation.

Is this a positive change? Opinions differ a bit on this. Prime Minister Narendra Modi, who has adopted Varanasi as his constituency, spoke about development and the new India as the temple reopened late last year. But some locals feel this has come at the expense of the character and history of the ancient city, one of the oldest inhabited places in the world.

“Look, there was a temple here,” says Ajay Sharma. He grew up in the old part of Varanasi, which he calls by its historical name Kashi. Sharma has unsuccessfully tried to stop the demolition of small temples, he says dozens, through the courts.

Now it is lost in an alley, which has been completely opened up on one side and behind a fence shows the new grounds around the Kashi Vishwanath temple. He points behind the door. “It’s terrible: there is now a toilet building there! Exactly where a small temple used to be.”

With Sharma, we immersed ourselves in ancient Varanasi:

On the road to Varanasi: “Has the same effect as a thousand pilgrimages”

For Hindus, ancient Varanasi is one of the holiest cities. The important Kashi Vishwanath temple, built in the 18th century to worship the god Shiva, has long been hidden in a maze of alleys and is not visible from the Ganges.

This is what happened to Modi, who has now opened the temple directly from the sacred river with a brand new quay and a wide pink sandstone staircase. A large courtyard was also built around the temple, which could accommodate 75,000 devotees at a time.

More than 300 houses were demolished for this. About 1,400 people, including shopkeepers and street vendors, had to make way. They were compensated, but they didn’t really have a choice. Ancient and hidden temples have been discovered in many demolished houses. About forty of them have been preserved and integrated into the new complex. Countless others had to give in.

Sharma shows pictures and videos on her phone of bulldozers and statues of gods in the rubble. “That people had to move is one thing. They have another house. But where should the gods go? The gods lived in these alleys, in these temples.

He strikes up a conversation with shopkeeper Raj Kumar Singh, who was allowed to stay but now overlooks the new toilet block. He is also angry at the missing temples.

“Modi is exactly like Aurangzeb,” he says, referring to the 17th-century Muslim emperor who demolished several Hindu temples, including the original Shiva temple in Varanasi. Sharma nods. “Many Hindus are outraged by this historic injustice, but why not these temples, which were demolished before the eyes of their own prime minister?”

Pilgrim Subham Kumar doesn’t know what was demolished for the project, but he thinks it turned out magnificent. With his wife and two young children, he is on a pilgrimage for a few days in the holy city, about 250 kilometers from their hometown. They sit on the new wide staircase between the temple and the Ganges and overlook the river. “Listen, we walk around here barefoot. It’s just possible, it’s also clean and smooth.”

Journalist Suresh Pratap sees something completely different when looking at the wharf, where the piers still stand. “Here where we are now, the Ganges was flowing,” says Pratap. “The natural course of the river has been interrupted.” While, according to him, nothing new is allowed to be built in the river here.

Pratap wrote a book about the renovation of the old town. It tells the story of the city, passing all the different ghats, the steps that descend from the city to the river for those who want to take a bath or a boat. For him, it is above all what has been lost with the renovation.

“Where the bulldozers arrived, there was a neighborhood called Lahori Tola. The name comes from the first inhabitants of this neighborhood, who came from the now Pakistani city of Lahore. They arrived with the Sikh King Maharaja Ranjit Singh, who put the gold leaf on the temple donated. And the people of today were mostly their descendants. It’s living history, just gone now. Made invisible.

But isn’t development needed to steer the old city into the future with new amenities and accessibility, as Modi puts it? Pratap shrugs. “What is development? All this news? Those alleyways, I think they contained the identity of the city. I liked that.”