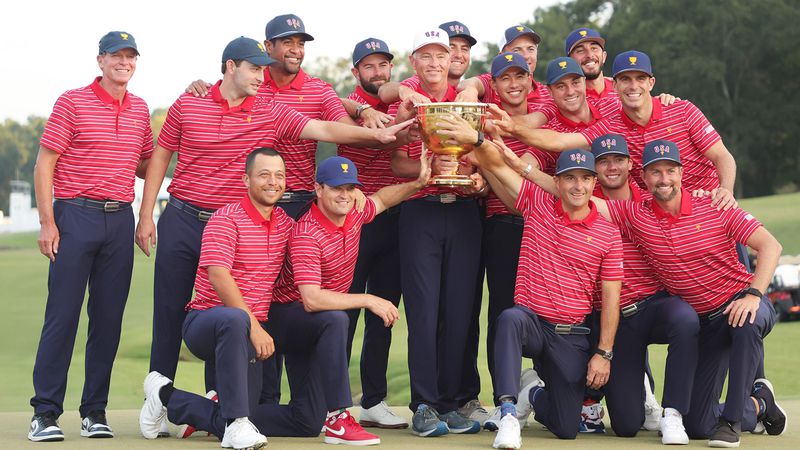 “This team is no joke”, Trevor Immelman defended “his” Internationals after the match. “And I’m sick of people talking about this. We were 8-2 behind Friday night and we made a game out of it.

Strong language, and not unfairly, but those words couldn’t hide the fact that the Presidents Cup with America 12-1 in favor (once there was a draw) was history quite one-sided for decades.

However, the South African was right that the Internationals fought their way back into the game last weekend, so the closing singles still produced some tension. Saturday sessions were won 5-3 to reduce the deficit to four points on Sunday morning (11-7)

For US captain Davis Love III, that was reason enough to start with his strongest players. With mixed results.

Justin Thomas had to admit his superiority in Si Woo Kim’s opener, Scotty Scheffler lost to Sebastián Muñoz and Hideki Matsyama got a half point against Sam Burns. It gave the Internationals some hope, but it wasn’t a fluke – the American team was too strong in the width.

Bloodthirsty form Jordan Spieth won his fifth game to become the sixth player in the game’s history to win a clean slate. Then Patrick Cantlay and Tony Finau took America to 14.5, after which Xander Schauffele had the honor of scoring the winning run. “It feels good to win,” said the match winner. “It was still a bit exciting.”

And that was a good description of the fourteenth Presidents Cup: a bit exciting. If you see the glass half empty, then America won for the ninth time in a row and a different result was never hidden for a moment. If you go for the full half, the Internationals – battered by the lack of LIV guns – sold their skins high enough to make for an entertaining match.

Hopefully the glass will be at least three-quarters full during the Ryder Cup.