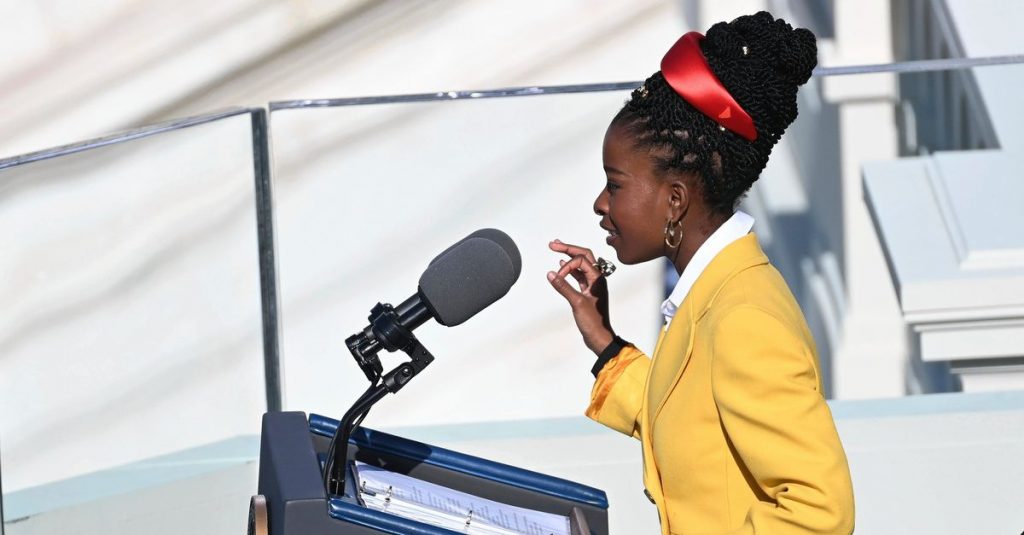 The unexpected star of US President Joe Biden’s inauguration was a 22-year-old poet. Amanda Gorman, poet and activist, gave a speech of just under six minutes. She linked the unfortunate history of the United States to the fascinating message of unity that was also at the heart of the newly appointed president’s speech. But it wasn’t just the content that made an impression: it was also his performance, his diction, with a sense of rhythm, musicality and clever and meaningful rhyme. And especially the fact that as a young black woman, wearing a bright yellow Prada coat, she had the most honorable scene and made the American dream come true.

Gorman spoke of himself in the poem as one of the “successors” to a “country and a time / where a skinny black girl / descended from slaves and raised by a single mother / can dream of the presidency “.

The choice of Amanda Gorman as the youngest inaugural poet to date (the tradition was established by Kennedy, continued only by Clinton, twice, and Obama, also twice) was made by the First lady, Jill Biden. Gorman was already well known in high circles for speaking on official occasions, such as in the White House under Obama. At the age of sixteen, she became the chosen young poet, the youth poet laureate, for his hometown of Los Angeles, and held that honorary position for the whole of the United States in 2017, as the first holder of the title. Her poetry was shaped according to the stages she could climb: what she wrote had always been inspired by “what I want for myself and for my country”.

Amanda Gorman grew up in Los Angeles as a lonely marginal, a “weird kid” with a speech impediment. It didn’t make her popular in class, but it did get her to write, as a way of expressing herself. A teacher recognized his poetic talent, Gorman took part in poetry competitions and won, received scholarships, and at the age of seventeen published his first collection of poetry under his own direction. Poetry for which she “draws from deep sources, ancestors, the community, suffering souls”, as her colleague Luis J. Rodriguez characterizes it.

Shortly after the right-wing nationalist riots in Charlottesville in 2017, Gorman wrote: “Tyrants are afraid of the poet. / Now that we know that / we can’t blow it up. / We must / show it / not slow it down.Rhetoric which aims to arouse and which is musical at the same time. Which characterizes spoken word, the form of poetry that cannot do without recitation, because the phrases propelled by rhyme and rhythm must sound – like rap without music.

Gorman was already well known in high circles for his speeches on official occasions, such as in the White House under Obama.

This technique also influenced Gorman’s inaugural poem ‘The hills we climb“. She explained how “we” learned that the standards and notions “of what is / is not always just ice“. The rhyme emphasizes the difference in meaning with which it triggers the contrasts, just as when it says that being American is more than a “pride we inherit” (“a pride we inherit”) And that rhymes with the call to look at the past and ‘fix’ it (‘fix it”). For example, she connects the concepts by letting them rhyme: the first rhyme in „inaction” in “inertia” that the “next generation legacy“Become, the half-rhyme of”clumsiness” the “burdens“(Obligations).

She makes clear references to the history of racism and its impact in the present – with a reference to the recent storming of Capitol Hill: “We saw a force that would break our nation / rather than share it.Gorman followed by a plea for reconciliation. It may be an unambiguous message, but Gorman adds depth to his rhetoric with countless (historical) references. The country which “unfinishedDirectly refers to President Lincoln’s 19th century war speech at Gettysburg. Gorman evokes the image of the citizen who is calmly under “vine and fig tree“(” Vine and Fig Tree “), a biblical image, but also a reference used by President George Washington. In the large ring that Gorman wore, with the image of a caged bird, a tribute was recognized in the book I know why the caged bird is singing by Maya Angelou.

Gorman’s story culminated in a call for hope and strength. And above all, very visible in the connection-allusion we form, in unity, the key word of Biden’s speech. Gorman thus gave the poetry of the performance presidential look. By the way, Gorman had already said in 2017 that she had set her sights on the presidency in 2036. Hillary Clinton said in a post-inauguration tweet that she “can’t wait.”