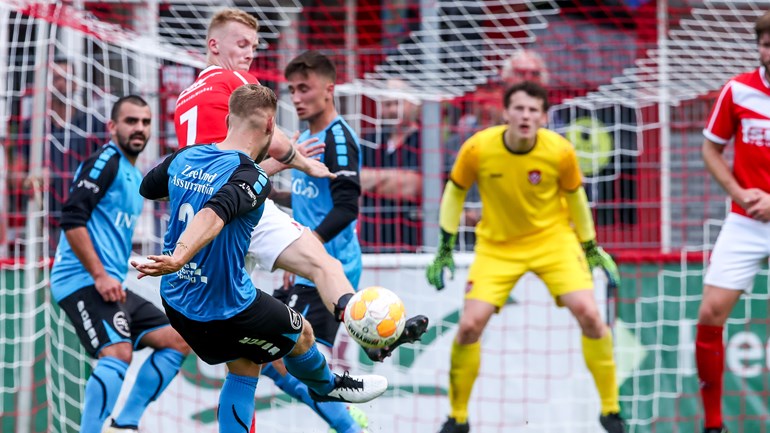 Beveland’s side have already played their first game a week before the official start of the season, as opponents Sportlust’46 wanted to celebrate their birthday in early October. “We’ve been busy with the prep since the start of July so it was nice for a while,” says Hollander.

After eight matches, his team are still winless. The last game against VVSB ended in a 2-2 draw, after a 0-2 deficit was erased. “It seemed like it looked like a win because of it, but then there was also the idea that maybe there was more to it.”

The point is that GOES is last in the third division with 4 points. Hollander takes confidence in the way his team played against VVSB in the second half. “It was confirmation that playing a little more risk pays off and that doesn’t always mean you score a goal.”

De Kok long out of circulation

The bad news is that defender Ralph de Kok may have already played his last game of the season. “He needs knee surgery. His meniscus and cruciate ligament are not good.”

In any case, the coach has a choice against Barendrecht. Ruben Hollemans, Stefan de Bert and Francis Kabwe Manengela have all recovered from minor injuries and are available again. Souffiane el Ouazzani still suffers from a torn ankle ligaments.

The game against Barendrecht is important for GOES. With a victory, Hollander Barendrecht’s team move closer to the standings. Saturday’s opponent is in fourteenth place. GOES, moving closer to the table, sinks deeper into the lower regions of the Third Division in the event of a defeat.

The Barendrecht – GOES match will be played on Saturday at 2:30 p.m. at Sportpark De Bongerd in Barendrecht. The match can be followed live on Twitter via @omroepzldsport. The highlights can be seen on Saturday evening via www.omroepzeeland.nl/sport and on Sunday on TV in a new Omroep Zeeland Sport from 6.10 p.m.