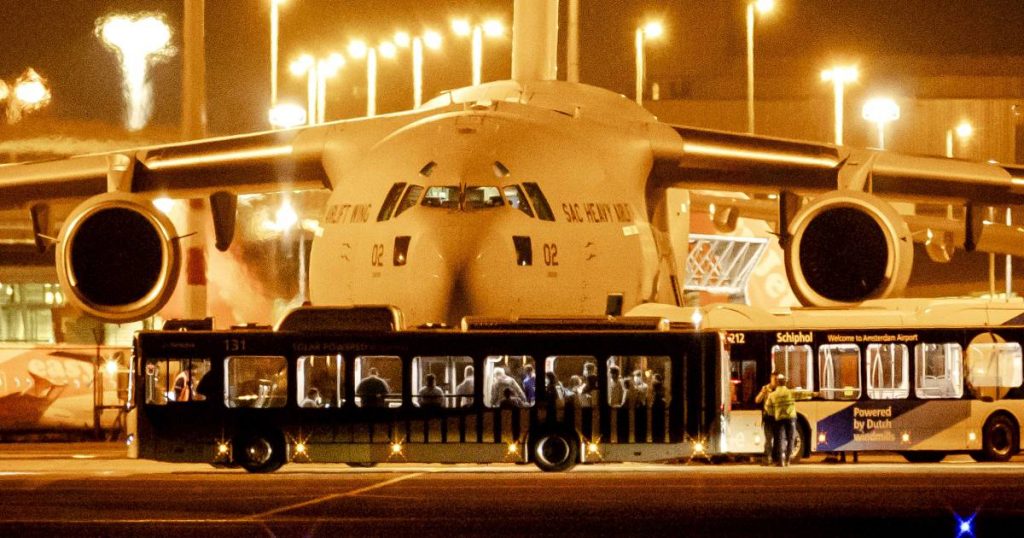 Almost all local Afghan embassy staff and their families will be evacuated on Saturday. This concerns 207 people who come to the Netherlands on different flights. Previously, they had remained in place, while Dutch diplomats were rescued.

Foreign Ministry spokesperson confirms evacuation of more than two hundred Afghans who worked for the Netherlands, after reports by NRC.

It’s a boost for the Dutch mission. Last week, the evacuation of staff from the Dutch embassy in Kabul drew much criticism. They were able to be brought to safety last weekend, but the Afghan workers were not recovered at that time. Dutch diplomats are reported to have left “like a thief in the night”, abandoning local staff. Now they are still safe. According to the Foreign Office, this concerns “almost all” staff members and their families. We don’t know why they were able to bring them to safety today.

Since the Dutch evacuation began last Wednesday, 118 people have been added to the Dutch Defense aircraft list, 17 allowed on Allied planes. This figure does not yet include people who were able to catch a flight today. It concerns people with a Dutch passport and therefore also Afghans who have worked for the Netherlands as interpreters, guards or cooks.

At Willem Lodewijk van Nassaukazerne in Zoutkamp (Groningen), where the latter group is received, there are now 78 Afghan evacuees. Defense assisted a total of 368 people from Kabul, many of whom also have to travel to other countries.

The afternoon flight also had another group (exact number unknown) from the Dutch evacuation list. These are Dutch nationals visiting (family) in Afghanistan, but also Afghan interpreters and other employees of military missions. In total there is still seven hundred people with Dutch passports in AfghanistanIn addition, the Netherlands wants to bring here hundreds of Afghan helpers and their families.

Defense therefore has an airlift from the Afghan capital Kabul. People are taken to a safe country in the region, and from there they go to the Netherlands with a bigger plane. Depending on the schedule, there will be three flights per day. The Ministry of Defense has two C-130 planes for this purpose. One has been broken since Thursday.

There is a team from the Dutch Embassy on site with over sixty military security personnel and we are investigating all alternatives to get people to safety on time.

Spokesperson for the Ministry of Defense

The situation in and around Kabul airport is still precarious. Little by little people manage to reach the airport, the Taliban manage the roads, the doors of the airport sometimes close completely because of the massive influx.

Some countries are now collecting evacuees – under high military security – just outside the airport, for example from a nearby hotel. But as far as is known, the Netherlands has not yet ventured into doing so, although the spokesperson cannot comment on it “in the context of the safety of people there”. “What I can say is that there is a Dutch Embassy team there with over sixty military security personnel and we are looking at all alternatives to get people to safety on time.”

A spokesperson for the Defense Ministry reports: “We don’t make any statement about what we do or don’t do, it’s a tightrope walker with security. The situation is chaotic and fragile. Too many reports could jeopardize the progress of the mission and jeopardize the safety of our personnel and evacuees. ”