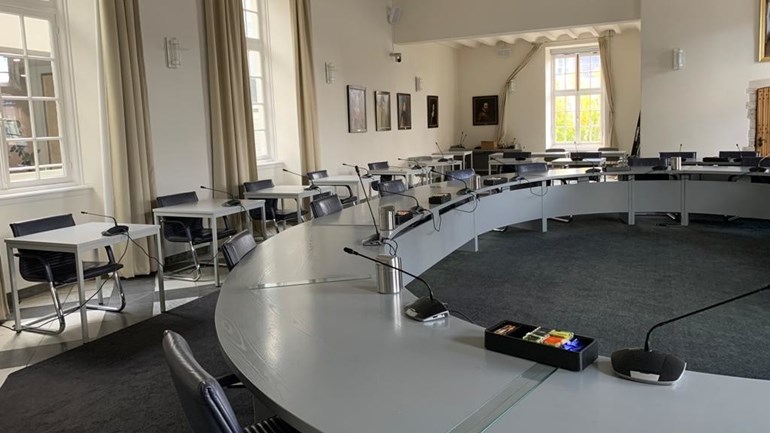 The large painting Vue de Hulst by Cornelis de Vos has moved to the new museum. A replica will be hung at the town hall.

The furniture is thirty years old and partly twenty years old and must be replaced, according to the college of mayors and aldermen. Especially the public seats of all kinds of colors are quite faded. With new furniture – fitted with casters – and a new layout of the space, the boardroom can also be used more easily and better for digital presentations.

First, it was checked whether the existing tables could not be reused and painted white, but the board decided not to. The boardroom is expected to have the same tables, chairs and colors as the committee and conference room. This also applies to the hall, which should become “a beautiful reception area”. B and W wants to create a unity between the spaces and let them radiate “the same atmosphere and the same charm”. Chairs and tables can also be exchanged more easily.

Cables can also be hidden in the new tables. The tables have a socket and a USB connection for two.

The tables remain in the same circular arrangement, but low ottomans are placed in the center of the circle. They provide a playful effect. Children can sit on it, for example at weddings or informal gatherings.

It’s no show when color differences and fingerprints from old tables and chairs can be seen on the carpet, which is why the board suggests replacing the carpet as well.

Last year, the boardroom was already equipped with cameras, a sound system and an induction loop for meetings and online meetings. The public can therefore listen to it at home. The ventilation is still being improved and the projector is hidden in the ceiling. The lighting in the boardroom is always good; who can linger.

The total renovation costs 180,000 euros. Moving the painting Hulst’s view and making a replica of the painting are not included. These are included in the museum’s renovation budget.

The General and Administrative Affairs Committee will discuss the layout of the council chamber on Monday, November 1.